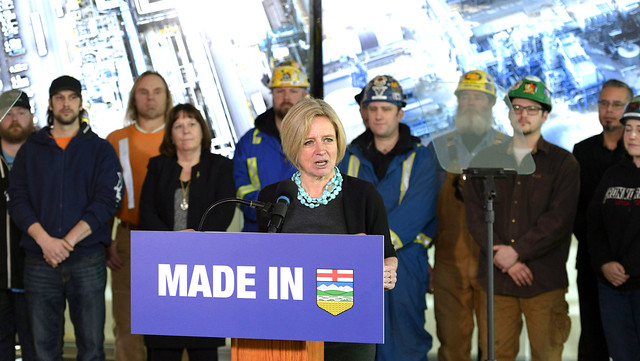 In Dec. 2018, Premier Rachel Notley announced a Request for Expression of Interest to determine business cases for investing in a new refinery in Alberta or tied to Alberta production.

Premier Rachel Notley and her government fought to protect workers and the Canadian economy by taking action in the short, medium and long term.

“For decades, Albertans have been talking about getting more value for our oil here at home. It’s time to stop settling for less. We’re grabbing the bull by the horns with a made-in-Alberta strategy to create more jobs, open new markets for our oil and gas, and make more of the energy products the world needs.”

In the long term, the province doubled support for petrochemical upgrading to $2.1 billion, which will leverage private investment that’s expected to help create about 15,000 jobs.

In response to strong industry encouragement, Alberta is taking action to explore private-sector interest in building a new oil refinery in the province. Building new refining capacity would create good-paying, long-term jobs for Albertans while helping lower the oil price differential over the long term.

“Large industrial value-add energy investments help provide economic resilience and diversification, and create highly skilled, well-paying jobs for decades. Alberta has abundant feedstock, skilled labour and the ability to refine our resources to high-value products the world needs. There is significant international competition for these projects and for Alberta to compete, government and industry must work together. We commend the government’s focus on ensuring that the value of Alberta’s resources stays with Albertans.”

The government also continued its fight for new pipelines. Premier Notley’s advocacy was instrumental in the federal government’s decision to purchase the Trans Mountain Pipeline. As well, the Premier continues to fight for needed changes on two federal bills:

This year, the province also launched the nationwide Keep Canada Working campaign to explain to Canadians the benefits of new pipeline access. The latest push includes a real-time lost-revenue counter to show just how much Canadians are missing out on by keeping Alberta’s energy resources landlocked.

“Under Premier Rachel Notley’s leadership, more Canadians than ever before support this project because they know we shouldn’t be selling our products on the cheap. There’s too much at stake. We will keep the federal government’s feet to the fire so that this project isn’t delayed any further.”

Over the medium term, the government took action to build more capacity for moving oil by rail to clear the backlog and stabilize the market. Upwards of 7,000 new rail cars will come online in 2019 to move 120,000 barrels a day out of the province to markets where Alberta oil can earn the best value possible.

In the short term, Premier Notley protected the value of Alberta’s resources by mandating a temporary reduction in oil production. The decision, in response to a historically high oil price differential, has prevented thousands of job losses and helped restore the value of Alberta’s oil. The price gap is caused by the federal government’s decades-long inability to build pipelines.

A more efficient regulatory process means new oil and gas projects can begin operating faster, creating jobs and maintaining competitiveness. The new process is fairer, faster and more accessible, saving industry hundreds of millions of dollars while making the process more transparent and accessible for Albertans. The new approach is expected to save industry $600 million by 2021, and is helping reduce the regulatory review time for an oil sands project from five years to just 15 months.

Two major oil sands milestones were also celebrated in 2018. Premier Notley and Minister McCuaig-Boyd joined Suncor for the successful startup of the Fort Hills project, which put 7,900 people to work at the peak of construction and is employing 1,400 people full time now that the project is operational.

The government also highlighted a new $400-million investment in the Long Lake South West project by Nexen, a wholly owned subsidiary of CNOOC Ltd. With leading-edge technology, the project illustrates that a major oil sands producer can be both an energy and environmental leader while showing a long-term commitment to creating good jobs in Alberta's energy sector.

“The Long Lake South West project demonstrates CNOOC Limited’s long-term commitment to the Alberta energy sector. Our oil sands development is an important component of our global portfolio, and through technological advancements we are pleased to be responsibly growing our production while reducing our overall emissions.”

Private companies are partnering with First Nations to invest close to $1.2 billion in renewable energy projects in Alberta. This helps create new jobs and continues with record-setting low prices for Albertans. These results showcase Alberta as a proud leader in all forms of energy.

The five successful projects are made possible through the latest phase of the Alberta government’s Renewable Electricity Program. They include investments from homegrown Alberta companies, as well as from new investors from across Canada and around the world.

In total, the new developments will create about 1,000 jobs, attract new economic opportunities for Indigenous communities and bring an estimated $175 million in rural benefits over the life of the projects.