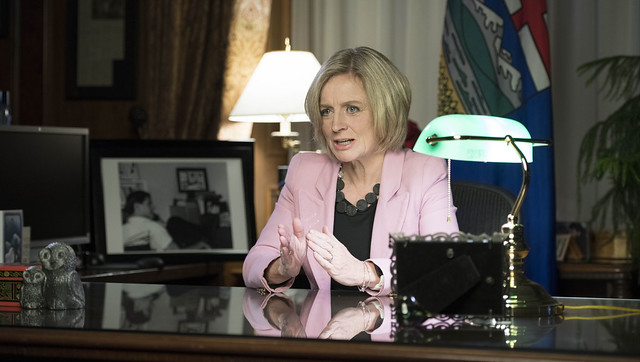 Premier Notley announces action on the oil price differential to protect the value of Alberta’s resources.

Premier Rachel Notley announced the temporary measure in response to the historically high oil price differential that is costing the national economy more than $80 million per day. The price gap is caused by the federal government’s decades-long inability to build pipelines. Ottawa’s failure in this area has left Alberta’s energy producers with few options to move their products, resulting in serious risks for the energy industry and Alberta jobs.

Alberta is currently producing 190,000 raw crude oil and bitumen barrels per day more than can be shipped by pipelines, rail or other means. The amount of oil that is being diverted to storage is at record highs and storage is nearing capacity.

Under the action announced, production of raw crude oil and bitumen will be reduced by 325,000 barrels per day to address the storage glut, representing an 8.7 per cent reduction. After excess storage is drawn down, the reduction will drop to an estimated average of 95,000 barrels a day until Dec. 31, 2019 when the rules supporting this action end.

Relative to inaction, curtailment is projected to reduce volatility, narrow the differential by at least $4 per barrel relative to where it otherwise would have been and add an estimated $1.1 billion of government revenue in 2019-20 – money used to pay for roads, schools and hospitals.

“Every Albertan owns the energy resources in the ground, and we have a duty to defend those resources. But right now, they’re being sold for pennies on the dollar. We must act immediately, and we must do it together. I can’t promise the coming weeks and months will be easy, but I can promise we will never back down in our fight to protect jobs and the resources owned by all Albertans. I will never stop fighting for Alberta.”

The Alberta Energy Regulator will implement the reductions starting in January 2019. The reduction amount will be reviewed each month to make sure production is in balance with transportation and storage capacity. A 10,000 barrel per day exemption will ensure the smallest oil producers are not unduly affected.

The reduction reflects broad consensus in industry and input gathered by expert envoys appointed in November to work with oil companies on solutions to the oil price differential.

Premier Notley’s fight to get top dollar for our energy resources includes a made-in-Alberta strategy to build new pipelines, invest in new rail capacity, and add value through more upgrading of oil and gas here at home. Combined, these efforts will create thousands of new jobs and attract tens of billions of dollars in new private investment.