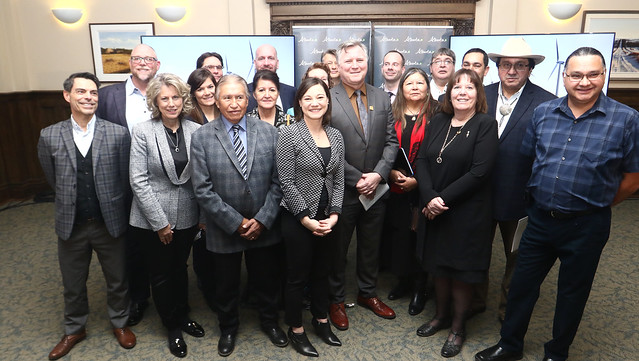 The five successful projects are made possible through the latest phase of the Alberta government’s Renewable Electricity Program. They include investments from Albertan companies, as well as from new investors from outside the province, with companies from Ontario and France.

In total, the new developments will create about 1,000 jobs and generate about 760 megawatts of affordable renewable electricity – enough to power nearly 300,000 homes.

“Our made-in-Alberta plan is working to once again turn Alberta's renewable energy resources into new jobs and investment in communities across the province, while producing the lowest-cost power available for Albertans. These major private investments in southern Alberta wind projects also bring important professional service opportunities to downtown Calgary and new economic opportunities for Indigenous communities, making it a win-win for all Albertans.”

Three of the wind projects are private-sector partnerships with First Nations, which include a minimum 25 per cent Indigenous equity component that will help create jobs and new economic benefits. Additional opportunities may include skills training and educational opportunities.

“We sincerely thank Premier Rachel Notley and the current government for opening the door for Indigenous partnerships with industry in this program. This is an important first step in economic reconciliation that helps our children and their children prosper alongside other Albertans for generations to come. We’re greatly looking forward to partnering with EDF Renewables, as they recognize and respect the importance of our traditional and ancestral lands. I also want to thank our partners at Indigena Capital, who assist us in empowering our rights and resources by sourcing the capital we need to be able to profit from our participation in initiatives like this.”

In addition to new local jobs and contracting, the five projects will bring an estimated $175 million in rural benefits over the life of the projects, including landowner payments and municipal revenues.

The weighted average price of 3.9 cents per kilowatt hour for the latest round of projects is just shy of the Canadian record-low price achieved by Alberta in 2017 and continues to be among the lowest in the country, including less than half the price of a recent procurement in Ontario.

“For over 100 years we have produced reliable power for Albertans, and we are pleased to have been awarded the contract to supply Albertans with 20 years of renewable energy. The Renewable Electricity Program contract and the Windrise project enable TransAlta to proudly continue to invest in and grow in Alberta.”

Each of these projects are expected to begin construction in 2020 and be fully operational by mid-2021:

In total, Alberta’s Renewable Electricity Program will support the development of 5,000 megawatts of renewable electricity to reach a target of 30 per cent renewable energy by 2030 while creating more than 7,000 jobs for Albertans.

Support for the Renewable Electricity Program is made possible by reinvesting revenues from carbon pricing under the Climate Leadership Plan. The program is not funded from consumer power bills in any way.

“This is a historic announcement, showing our government's true commitment to partnering with Indigenous communities to create new jobs and economic opportunities. First Nations have played a key role in Alberta's renewable electricity sector, and this is only a first step in a meaningful, long-term relationship of developing green power with Indigenous communities.”

“Alberta isn’t just a proud leader in oil and gas; we’re a leader in renewable energy, too. Once again, these low prices are beyond expectation, showing that our made-in-Alberta plan is getting results. We’re making life better by creating new jobs and attracting investment from around the world, including homegrown Alberta companies.”

“Calgary is Canada’s energy capital, with the expertise, skills and entrepreneurial spirit to build world-class projects in solar, oil, wind, gas, clean tech and beyond. Our diversity of resources is the definition of true energy leadership and with Alberta offering the some of the strongest opportunities for renewable energy development in North America, Calgary is the location of choice for Canadian and international renewable energy developers.”

“We’re proud that the first utility-scale wind farms in Canada were built in southern Alberta back in the 1990s, and since then, have been an important source of low-carbon electricity and a key economic driver of our region. Today’s news is another great example of how wind energy development has positive impacts for landowners and communities by providing new revenue, creating new jobs and offering generations of opportunity for southern Albertans and people across the province.”

First Nations involved in this program:

“The current Alberta government should be credited for fostering relationships between Indigenous communities, industry and non-profit organizations like ours to build opportunities that benefit all Albertans. This program is an important entry point into Alberta’s renewable energy sector, providing much-needed revenue streams and employment opportunities for First Nations while generating economic and environmental benefits for the province as a whole. FNPA is pleased to have been part of the discussions that formed the foundation for where we are today, and we believe the knowledge gained will lead to even greater success for First Nations in the future.”

“We share the pleasure of the announcement with our partners, Capstone. This project is a great step for Sawridge First Nation as it helps us move forward in our continued endeavors towards self-reliance, while balancing the need for energy and protecting Mother Earth for our future generations.”

“With this announcement of five low-cost wind energy projects, it’s clear that wind energy is well positioned to provide the affordable, emission-free electricity needed to meet Alberta’s ambitious renewable electricity targets. It’s also clear from the number of companies bidding into the procurement process that wind energy developers continue to prioritize Alberta as a destination for new investment.”

“EDF Renewables is very pleased to be investing in Alberta, which, thank you to this government’s commitment, has made the province one of North America’s most competitive and successful markets for renewable energy. We’re proud to be partnering with the Kainai First Nation (Blood Tribe) on the Cypress Wind Project. It will create hundreds of well-paying jobs, invest millions into Cypress County and Alberta’s economy, while generating affordable renewable electricity for Albertans.”

“We are excited about the successful collaboration of Potentia and our excellent local development partners. Alberta is an attractive investment environment and we are pleased to invest almost $500 million of capital into these long-term projects. We look forward to continuing to work with the Government of Alberta, the Paul First Nation and our host communities and landowners to deliver clean power to the Alberta grid, along with the jobs and local economic growth that accompany projects like these.”

“We are extremely pleased to be investing in Alberta with our partner, the Sawridge First Nation. The development, construction, and operations of the Buffalo Atlee Wind Farm will provide significant environmental benefits, create jobs, drive local economic activity and deliver excellent value to Alberta ratepayers. We look forward to completing this exciting project in Alberta, which has become a destination of choice for renewable energy investment.”