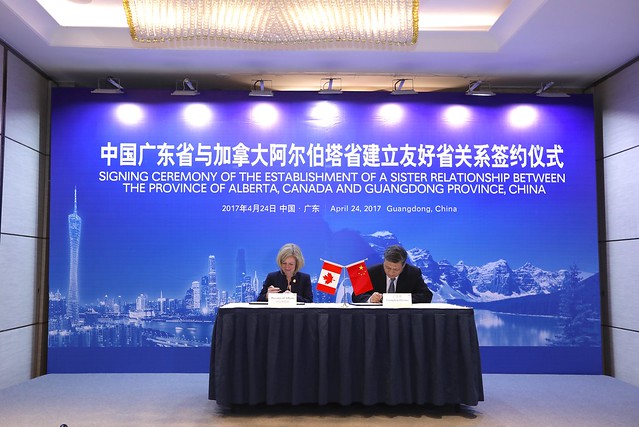 “By entering into a sister-province relationship with Guangdong, we are opening new channels for our provinces to collaborate and build strong business and cultural links. I am confident that the agreement will create opportunities for Alberta companies to expand their business and reach a new market.”

Guangdong represents 25 per cent of China's total imports and exports and is the largest recipient of foreign direct investment in China. Approximately 20 per cent of Canada's exports to China go to Guangdong, making it the No. 1 provincial destination in China for Canadian exports.

The agreement includes Guangdong’s plans to become one of China's top performers in improving water quality and reducing carbon emissions. It also focuses on economic growth and diversification and further developing bilateral relations in the areas of:

"This agreement brings our relationship to new heights, and we need to take further action to create practical and tangible results. There is huge potential in our cooperation."

To leverage the growing opportunities in the area, Economic Development and Trade Minister Deron Bilous opened the Alberta Guangzhou Office in March 2016. Other efforts to expand the Alberta-Guangdong relationship include Minister Bilous’s participation in a trade and investment seminar in Guangzhou in November 2016. The seminar featured more than 80 Alberta companies and economic development associations.

Alberta has also been in successful sister-province relationships with Gangwon, South Korea since 1974, with Hokkaido, Japan since 1980, and with Heilongjiang, China since 1981. The relationships have led to a variety of partnerships across sporting, educational and cultural events, as well as in research and business ventures. Each of Alberta’s sister provinces expressed their concern during the Fort McMurray wildfires last spring and contributed to Red Cross relief efforts.