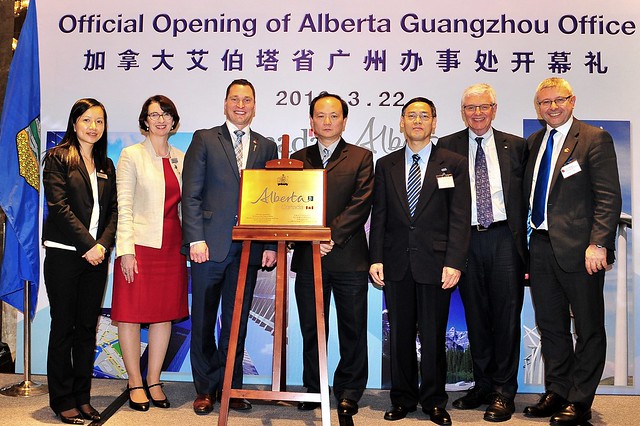 Minister Bilous at the opening of the Alberta Guangzhou Office on March 22, 2016.

Guangzhou is the business hub of Southern China. The new office will showcase Alberta as one of the best places to do business, as well as attract investment, strengthen key relationships, and identify new market opportunities for Alberta businesses.

“Given the challenges Alberta’s families and businesses are facing due to the collapse of global oil prices, it’s more important than ever to diversify our markets. The new Guangzhou office will be instrumental in promoting trade and investment opportunities for Alberta businesses in the region. This is another concrete step the government is taking to help create jobs and diversify the economy.”

"Taking action to diversify markets is crucial for trade-focused economies like Alberta's. The Government of Alberta's decision to open an office in this important city gives Alberta companies and businesses a leg up in this important and fast growing market."

“We appreciate the support of the Government of Alberta and welcome the opening of a new international office in Guangzhou. Alberta’s offices have been instrumental in helping Sunterra develop productive trade relationships in regions around the world, and I am confident the Guangzhou office will help increase our access to the southern China market.”

Since 2003, Alberta’s trade relationship with China has more than tripled. The province’s exports to China increased more than 16 per cent from 2014 to 2015, totalling $3.8 billion last year alone.

Alberta’s network of international offices consists of 12 offices located in key markets around the globe, including three in mainland China – one each in Beijing, Shanghai, and now, Guangzhou. Between 2014 and 2015, Alberta’s international offices bolstered 33 trade deals or investment projects to the province.

The Guangzhou office will be opened at no additional cost to taxpayers. Savings from cost reduction efforts throughout Alberta’s international offices network will be used to cover the Guangzhou office’s annual budget, such as re-allocating staff positions from the Alberta Beijing Office and reducing operating costs of the Alberta Hong Kong Office.