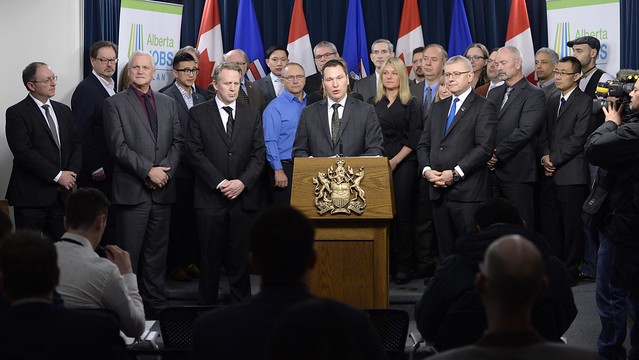 Minister Bilous and Ron Hoffman, Alberta's senior representative to the Asia-Pacific Basin, are joined by business leaders who participated on the successful mission to Asia.

In China, the minister participated in trade and investment conferences alongside Alberta companies, municipalities, universities and industry associations. More than 1,200 Chinese enterprises and dozens of senior government officials met the Alberta delegation, with sessions in Guangzhou, Shanghai and Yantai.

The Japan portion of the mission focused on food exports and innovation in forestry. Minister Bilous attended the Canada Food Expo, a forestry roundtable with industry leaders and experts, and a cellulose nanocrystals (CNC) seminar. Alberta is a world leader in CNC research and commercialization. CNC is a natural, renewable nanomaterial produced from forestry or agricultural pulp and fibres and is used in a variety of industrial applications.

“Alberta businesses lead the country in many sectors and have a lot to offer in the international marketplace. We want to diversify our markets, so we can continue building a stable, resilient economy for the future. The connections we made in Asia turn into new opportunities for Alberta businesses, which mean new jobs here at home.”

As part of the Alberta Jobs Plan, the recently created Export Support Fund provides small businesses with up to $20,000 for a variety of export expansion activities. Eleven businesses used this support to participate in the trade mission. The first round of applications for the program is open until Jan. 31, 2017 with a second round of intakes starting Feb. 1, 2017.

“We wouldn't have had the resources to explore the Chinese market if it wasn't for this trade mission. This program provided exactly what we needed to get started - an understanding of the Chinese market as well as one-on-one introductions to potential Chinese partners in the industry."

“The Asian mission represented an opportunity to connect with markets that are important to the forestry sector. Although we are already active in these markets, the minister’s leadership of this mission, and his engagement with Alberta companies, helped open doors for us and will help us in our future efforts in these critically important markets.”

“Access Prosperity’s participation in this mission is already proving to be fruitful. As the investment attraction officer, I have been able to solidify pre-existing relationships as well as forge new ones with investors interested in the central Alberta region. We are hopeful in continuing the conversations with an inbound delegation in the New Year.”

“As the largest current tourism-related development in Alberta, Badlands Recreation Development Corporation is appreciative for support offered by the Alberta government, and the mission to China. This opportunity to present the Badlands Motorsports Resort project provided us new networks and support, not only in China but Alberta as well.”

“The Alberta Trade and Investment Attraction Mission to China was very helpful to Canadian Rocky Mountain Beef and our China export program. Meeting existing clients and new prospects during the mission adds credibility to our company and industry. Particularly in China, aligning with our government representatives is valuable. We were able to confirm new business in China during the mission.”