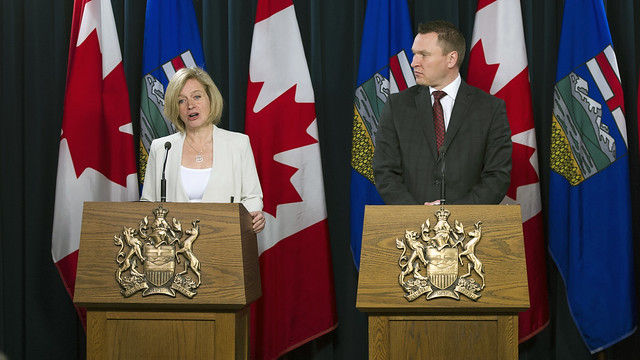 Premier Notley and Minister Bilous provide details on their upcoming mission to Asia.

Common themes will include opportunities to collaborate on climate change and growing capacity for clean technology and renewables. The mission’s priority is to grow Alberta’s energy market and diversify the province’s export market.

Visits to Beijing and Guangzhou in China will highlight Alberta’s commercial strengths, including in tourism and oil and gas exports to Asia. In Tokyo, Alberta’s energy, lumber, beef and pork products will be at the forefront. The Premier is expected to sign a memorandum of understanding to promote collaboration on energy and technology.

“China and Japan dominate Alberta’s export economy, second only to the U.S. Trade and investment missions are instrumental to connecting with the right people and identifying how to harness that potential. Building and fostering productive and visionary relationships with both countries will mean more jobs in a growing and increasingly diverse economy here at home.”

Economic Development and Trade Minister Deron Bilous will join the premier. It will be his third mission to the region, following successful trade missions in March 2017 and November 2016.

“We have a strong record of trade, investment and partnerships to build on. Our exports to Asia are represented by our major industries, energy, petrochemicals, agriculture, forestry and value-added products in those sectors. Asian investors and businesses are hungry for these products, and face-to-face meetings with our Premier will build more confidence and credibility for our companies.  Showcasing Alberta abroad means more opportunities at home.”

China and Japan are Alberta’s second- and third-largest trading partners, respectively. The province’s trade with China has tripled since 2003, while Japan represented 15.7 per cent of non-U.S. exports last year. In 2016, Alberta’s two-way trade with China and Japan totalled more than $7.4 billion, with potential for growth. Alberta is well positioned to meet the high demand for energy resources, raw materials and quality commodities created by Asia’s rapidly emerging urban middle class and modernizing economy.

The estimated cost for the mission for the Premier, the minister, four political staff, two public servants and a security detail is $140,000. Members of the official delegation also include Mary Moran, CEO of Calgary Economic Development, and Gordon Houlden, Director of the China Institute at the University of Alberta. Both delegates are responsible for their own expenses.