At around 3:41 p.m., CPS received 911 calls about a man on 17 Avenue S.E. near 44 Street who was holding a stick and a knife. One caller reported that the man had hit someone with the stick.

At 3:46 p.m., the first officers arrived on scene and located the man, who was still holding the stick and the knife. More officers arrived and surrounded the man from a distance. Video of the incident shows that the man was sitting down on the sidewalk while officers spoke to him. Officers can be heard on the video repeatedly telling the man to drop the knife or throw the knife away.

Video shows that the man started to get up and move at 4:02 p.m. An officer then discharged less-lethal baton rounds at him. The man stood up and began to run in the direction of a group of police officers and police vehicles. A police service dog on a lead was allowed to approach the man as he approached the front of the police vehicles. Video shows that the dog’s handler pulled the dog back, upon which the man advanced in the direction of the dog and the handler. In the ensuing altercation, the man swung the stick and stabbed the knife at the dog while the dog bit the man and officers used conductive energy weapons on him.

Emergency medical services, which had been waiting nearby, and CPS officers provided medical care to the man at the scene. Their efforts were unsuccessful and the man was pronounced dead. 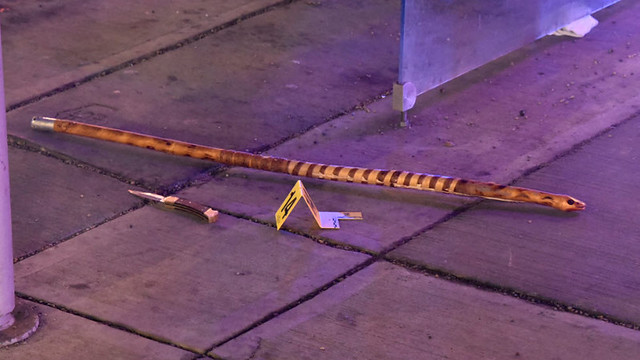 Knife and stick recovered from the scene after being moved by officers.