Shortly thereafter, the officers confronted the man inside the residence. During the encounter, an officer discharged his service weapon, injuring the man who was able to retreat into another room. Not long after, the man surrendered and was taken into custody without further incident.

Officers on scene provided emergency first aid to the man until Emergency Medical Services (EMS) arrived and took over care before transporting the man to hospital. The man was assessed, treated and discharged from hospital back into police custody.

The civilian reporter has confirmed that he heard commands to drop a weapon prior to shots being fired. A bladed weapon was recovered at the scene. The injured man has confirmed that at the time of the officer-involved shooting, he was in possession of this weapon, which he referred to in the interview as either a “knife” or a “sword.” While this evidence provides some context for the event, there is considerably more work to be done. It remains to be established what, if anything, the man may have done with the weapon; what the officers, including the officer who discharged his firearm, observed; and what prompted the use of potentially lethal force. 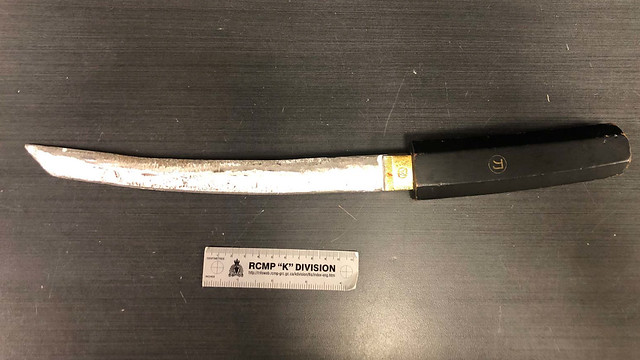 Weapon recovered from the incident scene.

ASIRT’s investigation will examine the circumstances surrounding the police officer’s discharge of his firearm. The RCMP retains responsibility for the investigation into the man’s conduct. No additional information will be released.