On that day at about 6:38 p.m., RCMP received a call requesting police attend to a location on Township Road 622 between Range Roads 442 and 443. The caller reported that he had come upon a young woman on the road who reported that she had been assaulted by a man, who had also taken her vehicle keys before departing on foot, leaving the woman’s vehicle parked in the middle of the road. The woman spoke to police, provided the man’s name and indicated that while providing the man, who was known to her, a ride, he was acting strangely and began choking her dog, attempting to kill it. The woman indicated that she was able to exit the vehicle and remove her dog, but that the man had struck her. She stated to police that she believed the man may have consumed methamphetamine, and believed that he was not in possession of any weapons. The initial caller reported to police that the man was still in the area but had proceeded on foot down a cut line.

Two members of the Cold Lake RCMP responded to the call and requested en route that Police Dog Services (PDS) also be dispatched to the call. Before their arrival on the scene, the members were also informed that the man had an outstanding warrant and had been previously flagged for violence towards police.

At about 7:02 p.m., RCMP members arrived at the location, and following a track by the Police Service Dog (PSD), they located the man near a fenced oil company compound. A confrontation occurred between RCMP members, the PSD and the man, during which the PSD was stabbed and one RCMP member discharged his service firearm, striking the man. RCMP members provided first aid to the man and requested Emergency Medical Services (EMS). Upon their arrival, EMS assumed care of the man, but ultimately pronounced him dead at the scene of the incident. No RCMP members were injured during the confrontation, but the PSD sustained several stab wounds. A knife was recovered from the scene and has been seized as an exhibit. 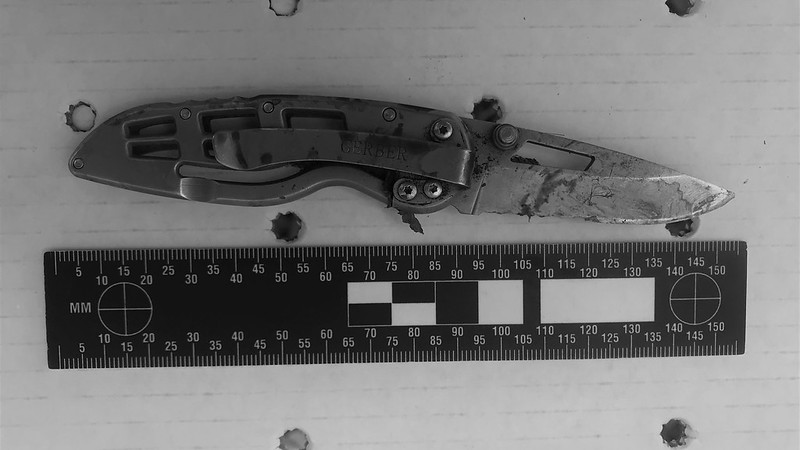 Knife recovered from the incident scene.