On that day at about 12:05 p.m., EPS West Division patrol officers responded to a report of a stolen trailer at 218 Street and Stony Plain Road. Once on scene, an officer in a marked police vehicle attempted to stop a silver Ford Escape towing an older model camper trailer by pulling in front of the suspect vehicle. The male driver of the Ford Escape failed to remain stopped and while attempting to pull around the police vehicle, collided with the front driver’s side of that vehicle. The man then drove the suspect vehicle westbound on the service road adjacent to Highway 16A, still towing the camper trailer. As the officer in the marked vehicle pulled ahead of the Ford Escape in an attempt to slow or stop the vehicle, the driver of the Ford Escape struck the rear of the marked police vehicle, then proceeded to drive westbound in the eastbound lanes of Highway 16A, at which time the police pursuit was terminated.

A lone officer in an unmarked EPS police vehicle began following the suspect vehicle and trailer from a distance, while further assistance was requested from EPS and RCMP. The unmarked police vehicle followed the suspect vehicle onto Secondary Highway 628 when, between Highway 60 and Range Road 264, the suspect vehicle stopped and a man exited, carrying a semi-automatic shotgun. There was an exchange of gunfire between the man armed with the shotgun and the lone officer. The man abandoned the shotgun on the roadway and returned to the Ford Escape and trailer, which then continued westbound on Secondary Highway 628. After the driver lost control of the Ford Escape on the narrow dirt road, the vehicle rolled over through a ditch and came to a rest in a treed area with the trailer still attached. The two male occupants fled the vehicle on foot and EPS contained the area while awaiting the arrival of additional police resources.

Following containment, both men were ultimately located and arrested at separate times without further incident, and both were assessed by emergency medical services at the scene. One of the men, a 31-year-old male, was transported to hospital for treatment of a non-life-threatening gunshot wound. Upon apprehension, the second man, a 32-year-old, was transported to hospital for drug-related issues.

A semi-automatic shotgun and shotgun shells, including physical evidence of an expended shotgun shell, were recovered from the location where the exchange of gunfire was believed to have occurred and have been seized as exhibits. 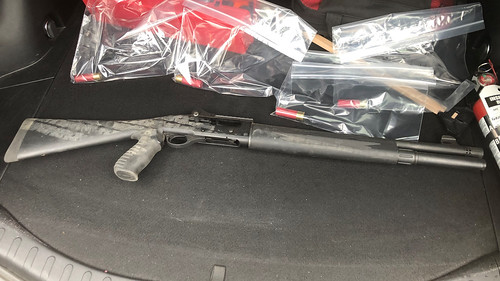 ASIRT’s investigation will examine the circumstances surrounding the discharge of a firearm by a police officer during this incident. EPS will maintain responsibility for the investigation into the two men and their actions. Anyone who may have witnessed or have video of the incident is asked to please contact ASIRT investigators at 780-644-1483. As ASIRT’s investigation is underway, no further information will be released at this time.