On that day at about 8:50 p.m., the Red Deer Royal Canadian Mounted Police (RCMP) received several calls reporting an erratic driver operating a grey Volkswagen Jetta. The vehicle was located by RCMP a short time later entering the parking garage of the Red Deer Regional Hospital. Both the responding RCMP member and the driver and lone occupant of the Jetta, the 46-year-old man, exited their vehicles, whereupon the police officer began speaking with the man. The officer called for backup, which arrived a short time later while attempts to communicate with the man continued. At this time, a confrontation occurred between the man and the police officers on scene which resulted in several members of the RCMP discharging their service firearms. During this confrontation, the man sustained gunshot wounds, and RCMP members provided first aid to the man until the arrival of EMS, who pronounced the man dead at the scene.

Video evidence obtained by ASIRT shows the man was in physical possession of a compound bow following his exit from the vehicle and at the time of the confrontation. Following the incident, a compound bow and several arrows were recovered from the scene and have been seized as exhibits by ASIRT investigators. 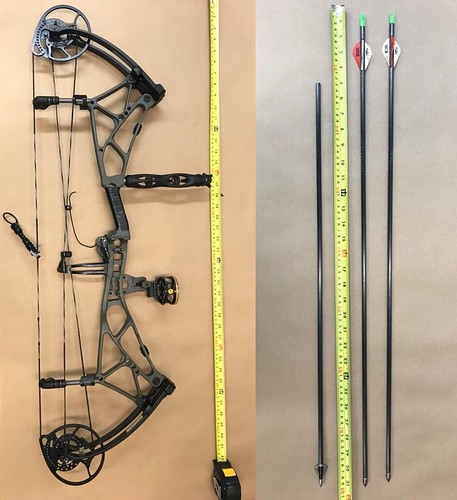 Compound bow and arrows recovered from the incident scene.