On that date at about 9:30 a.m., RCMP received a call reporting a disturbance on the O’Chiese First Nation, with the caller reporting that a man was jumping on vehicles. Two members of the Rocky Mountain House RCMP responded to the call in two separate vehicles. Upon arrival, the officers were unable to locate the man who had been the subject of the complaint, but received information directing them to a residence. When officers knocked on the residence door, it was answered by a 24-year old man who was known to them, and who was known to have warrants for his arrest. The man slammed the door, and the officers returned to their vehicles. At this time, a third officer arrived at the location. Police commenced the process of obtaining judicial authorization to enter the residence in order to arrest the man on his outstanding warrants.

At approximately 10:30 a.m., while the officers remained outside awaiting the authorization to enter, the man emerged from the residence. Based on available video, it is clear that the man was carrying an axe when he exited. A confrontation occurred between the man and RCMP officers, resulting in one officer discharging several rounds from his service pistol, striking the man, who immediately fell to the ground. The officers provided first aid to the man while awaiting the arrival of emergency medical service (EMS), who attended and confirmed that the man was deceased. The axe was recovered from the scene of the incident and has been seized by ASIRT investigators as an exhibit. 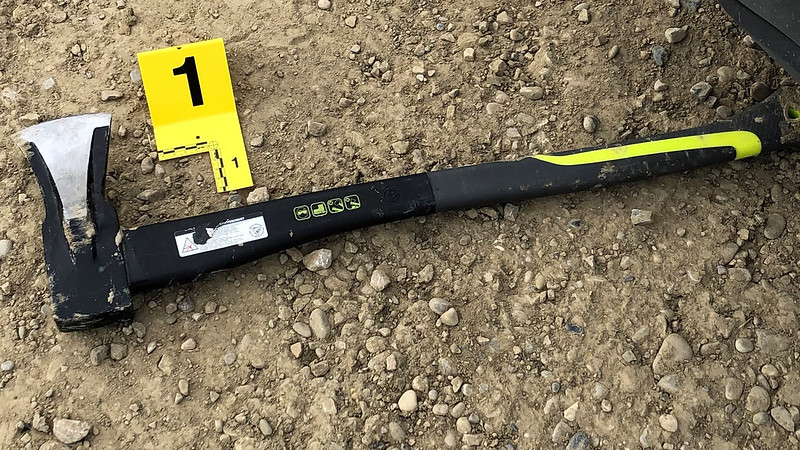 Axe recovered from the incident scene.

ASIRT investigators are asking anyone who witnessed the incident, or who has any information or video related to this incident, to contact ASIRT at 403-592-4306.