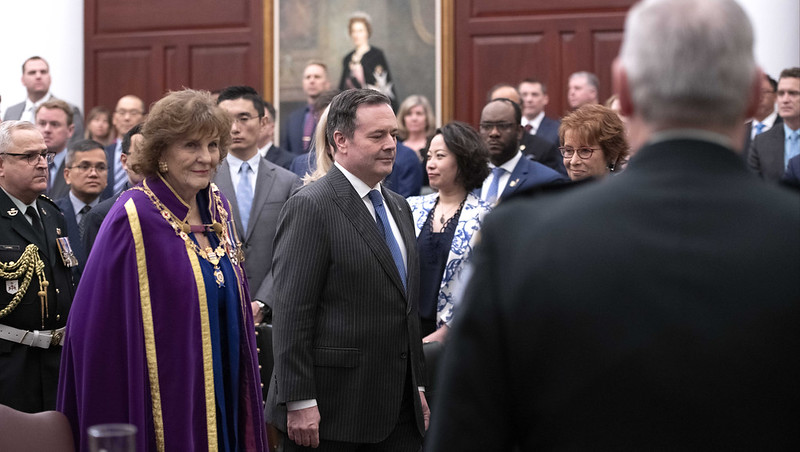 Premier Jason Kenney with Lt.-Gov. Lois Mitchell prior to the delivery of the 2020 speech from the throne.

The speech outlined the government’s plan to renew and defend the province’s economy – including legislation to protect critical infrastructure, such as roads and railways, from illegal blockades.

“Ours is a government obsessed with job creation. That’s why we’ll introduce our Blueprint for Jobs, which builds on policies brought in last year to keep business taxes low, cut job-killing red tape by one-third, and stand up for our energy sector. We’ll also defend Alberta jobs by making sure illegal blockades don’t threaten Albertans’ ability to earn a living or put food on the table. Albertans respect freedom of speech and association, including the right to protest, but there is no right to dangerously and illegally block roads and railways.”

This session will see several bills to advance Alberta’s fair deal goals. Albertans will be able to put important issues, such as a carbon tax, to a referendum through a new citizen initiative law. A new recall act will allow voters to remove MLAs, mayors, municipal councillors and school board trustees between elections. Legislation will also be introduced to replace the federal parole board with a provincial board for provincial inmates.

Other highlights of the throne speech include:

To address fiscal issues, government will carefully reduce overall spending by less than three per cent over three years. Health care, education and social services funding will be maintained at or increased to historic levels, and government will continue to protect front-line services.

Lt.-Gov. Lois Mitchell delivered the speech from the throne on Feb. 25, opening the second session of the 30th Alberta legislature.