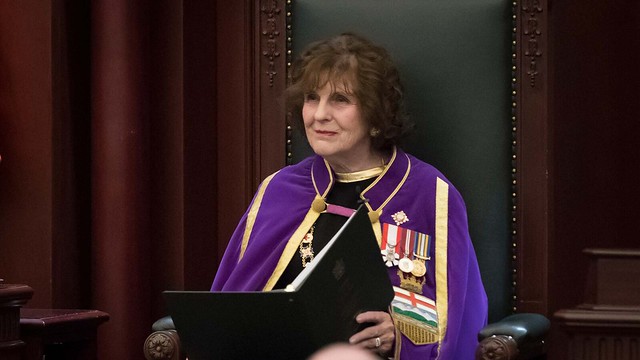 I speak to you as the Province of Alberta’s vice-regal representative of Her Majesty Elizabeth II, Queen of Canada.

This province honours its enduring ties to the Royal family and our democratic tradition of constitutional monarchy.

150 years ago this year the Hudson’s Bay Company sold Rupert’s Land, including much of the territory that became the province of Alberta, to the Dominion of Canada, bringing all of these lands under the Canadian Crown.

The same Crown enjoined us in treaties with First Nations to respect the rights, privileges and traditions of indigenous communities, a duty which we are bound to honour.

Last year we renewed our ties to the Crown, when we were honoured by the visit of Anne, the Princess Royal. I had the privilege of joining with her to announce Edmonton’s Commonwealth Walkway.

Spring is the season of renewal.

For all the people blessed to call Alberta home, from the First Peoples who have built vital communities on these lands for millennia, to recent newcomers from across Canada and around the world, spring arrives with an explosion of nature’s irrepressible energy.

Every spring we experience the breathtaking vitality of nature’s rush to renewal and are invigorated by it.

So it is with our democracy.

Once again, this spring, Albertans participated in the great democratic ritual of a free election bequeathed to us by the Westminster parliamentary tradition.

And they voted decisively for democratic and economic renewal through a change in government.

Recognizing that our province is beset by severe external political and economic constraints, and consequently saddled with serious internal fiscal challenges requiring urgent action, my Government will bring in a legislative programme focused on three main priorities:

First, a relentless focus on policies designed to create jobs, growth, and economic diversification. Alberta must show the world that we are open for business to restore investor confidence, while carefully restoring balance to our province’s finances.

Second, standing up for our province’s right to control and develop our natural resources and compete freely and fairly in the national and international economies. This requires securing pipeline access for Alberta oil and gas to world markets.

And third, making life better for all Albertans, by ensuring the quality and effectiveness of our public services, especially in health care and education, and by supporting the most vulnerable in our society.

Bill 1, as promised, will be the Carbon Tax Repeal Act.

In providing $1.4 billion in tax relief, it will make everything more affordable for Albertans.

If needed, my ministers will take legal action to protect Albertans from a federal carbon tax, and to support other provinces doing the same.

Bill 2 will be the Open for Business Act.

It will strengthen the rights of Alberta workers within unions, promote job creation for young Albertans, and retain recent advancements in compassionate leave. This will be followed in the autumn by further labour reforms to protect workers and help employers create more jobs.

It will lower the tax burden on employers by one third, from 12 percent to 8 percent. This will give Alberta businesses the lowest tax rate in Canada, and among the lowest rates in North America, renewing Alberta as a magnet for job-creating investment. Economists estimate that this reduction will generate 55,000 new full time jobs, and increase the size of our economy by $12.7 billion.

This will provide the means to lower the regulatory burden on Alberta’s economy by one third, reducing costs, speeding up approvals, and freeing job creators to get more Albertans back to work.

Estimates for the interim supply of public services will be presented in an Appropriation Act, to be followed by a full Budget this fall.

That Budget will be informed by the report of the Fiscal Review Panel chaired by former Saskatchewan Finance Minister Janice MacKinnon, which will make recommendations on how to restore balance to our province’s finances so that we stop encumbering future generations with debt. My government will also engage in widespread public consultations on how best to end deficit spending while protecting front line public services.

My government will also present a Tax Statutes Amendment Act.

My government will propose amendments to the Municipal Government Act.

These will enable municipalities to use property tax incentives to attract investment and create jobs.

My government will table a Royalties Guarantee Act.

Part of a plan to restore the competitiveness of the Alberta energy sector and win back the confidence of investors, this legislation will provide certainty that the royalty structure in place when a well is drilled remains in place for the life of the well.

My government will introduce the Fair Access to Regulated Professions and Trades Act.

This legislation will renew and reinforce Alberta’s historic role as a place of economic opportunity by making it easier and fairer for newcomers to be credentialed in their professions, work at their skill level, and contribute to our shared prosperity.

Her Majesty’s government, on the very day it was sworn in, proclaimed the Preserving Canada’s Economic Prosperity Act.

It will be used as necessary to ensure the value of Alberta’s energy products is maximized.

Also in the spring session, my government will present amendments to the Education Act.

These will include implementing the will of the Legislature as expressed in legislation passed in 2012, so that these well-considered reforms are in place for the start of the new school year in September of this year.

They will also include a commitment to curriculum reform, based on proven pedagogy that teaches essential knowledge needed to achieve foundational competences, and to prepare young Albertans to succeed in the future.

My ministers will also undertake important non-legislative actions this spring.

These include standing up for Alberta’s interests within the Canadian federation by seeking the Legislature’s support for a motion calling for the complete rejection of federal Bill C-48, which seeks to block access for Alberta’s bitumen resources to British Columbia’s northwest coast. A motion will also be proposed rejecting in its current form federal Bill C-69, the proposed Impact Assessment Act, which threatens Alberta’s exclusive jurisdiction over non-renewable natural resources, and is damaging investor confidence.

In bringing forward these and other initiatives, we will seek unity amongst Alberta’s political parties, wherever possible to speak with one voice.

In a world where the demand for energy will continue to rise, Alberta can, should, and will be one of the largest suppliers.

That is why my government will create an agency mandated to proactively tell the truth about how we produce energy with the highest environmental, labour, and human rights standards on earth.

My government will also challenge those who have for too long misrepresented these facts. In part this will be done by launching a public inquiry into the foreign sources of funds responsible for the campaign to landlock Alberta’s energy.

This year Her Majesty’s government will also create the Indigenous Opportunities Corporation.

Alberta’s First Peoples have played a crucial role in the development of this province, symbolized by Siksika Chief Crowfoot, who as leader of the Blackfoot peoples 150 years ago led his people into peaceful cooperation with the Crown, including the signing of Treaty 7.

But while Alberta’s natural resource wealth has been greatly developed since then, indigenous peoples have not fully participated in that prosperity.

The Indigenous Opportunities Corporation will support First Nations’ and other indigenous groups’ financial participation in natural resource development and infrastructure projects here, and in other parts of Canada. We have a moral obligation to empower First Nations to be full partners in the development of the resources that lie below the lands which their ancestors first inhabited, and to become partners in prosperity.

In the fall session my government will bring forward several other important bills.

These include the Farm Freedom and Safety Act, which will reduce the tax and regulatory burden on farmers, strengthen their property rights and competitiveness, and restore balance, fairness, and common sense to regulation of Alberta’s agricultural sector.

My government will further improve Alberta’s education system by presenting the Choice in Education Act.

It will renew the Alberta Advantage in education by restoring and expanding the choices available to parents and children.

My government will take action to address climate change by introducing legislation to replace the Carbon Competitiveness Incentive Regulation with a Technology Innovation and Emissions Reduction Fund.

This will be a balanced, environmentally-responsible and economically-efficient approach to reducing greenhouse gas emissions in Alberta through regulation at the primary source: large industrial emitters.

Further, it will ensure investment in new emissions-reducing technologies which can be exported around the world.

To help protect vulnerable Albertans, my government will introduce the Saving the Girl Next Door Act and table legislation to give effect to Clare’s Law.

My government will implement a strategy to combat the wave of crime that has victimized too many Albertans, in part by hiring more Crown prosecutors, and providing additional resources to police to respond to such terrible crimes as the exploitation of children.

And in order to improve decorum in this Assembly and civility in our politics, my government will propose amendments to the Standing Orders.

Members of the Legislative Assembly, this summarizes my government’s legislative programme for the spring and fall sessions.

Renewal is the animating theme of my government’s immediate legislative priorities.

It is the appropriate and necessary response to the fiscal and economic setbacks Albertans have experienced in recent years.

And it is only fitting to look to our history, the magnificent endowment of our natural resources and environment, and above all the values and character of our people, to inspire and achieve this renewal.

The scale and pace of social and economic progress in Alberta over the last 114 years exceeds that of virtually any other polity on earth.

We should always be grateful for those who have gone before us, who have been stewards of a great tradition of ordered liberty.

Albertans have consistently applied the principles of free enterprise, free markets, equality of opportunity, and prudent stewardship to optimize our God-given gifts.

No economic hardship has ever ruined us; no political enmity has ever defeated us; no natural disaster has ever stopped us.

Our success, our resiliency, and our yet-untapped potential is a powerful magnet that continues to attract ambitious and talented newcomers from across Canada and the world.

The political forces standing in the way of this inevitable destiny today are external and temporary.

Her Majesty’s government has a strong mandate to stand up for Alberta against those forces, powered by the unstoppable will, energy, and talent of Albertans.

Few places on earth provide such freedom of opportunity to achieve so much upward social and economic mobility.

This in turn fuels our economic growth and generates wealth that spills far beyond our borders and secures the prosperity and welfare of Confederation.

It is our duty and our destiny to renew Alberta’s role as an economic and political leader within Canada.

Members of the Legislative Assembly, if you would indulge my passion for Alberta history, I will leave you with the closing words of our province’s very first Speech from the Throne, on March 15, 1906, delivered by his Honour Lieutenant Governor George Hedley Vicars Bulyea:

“To the several matters herein referred to, and to all others that may be brought before you, I invite your careful attention, with the fullest confidence that the result of your deliberations will be beneficial to the Province and to the Dominion as a whole.”

May the blessings of Almighty God rest upon your counsels as you work to renew an Alberta that is, in the words of our province’s official motto, “strong and free.”