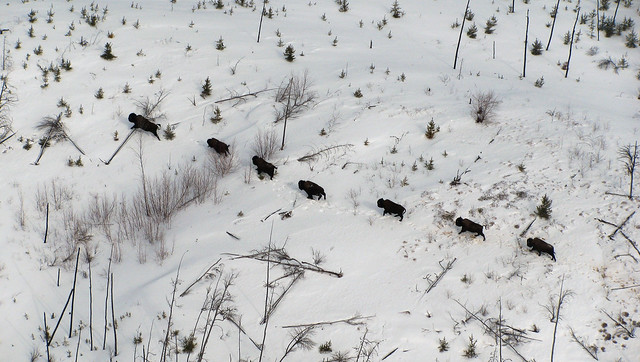 The wildland will preserve more than 160,000 hectares of land just south of Wood Buffalo National Park, protecting the Peace-Athabasca watershed and increasing ecological integrity and habitat for species at risk such as woodland caribou and the Ronald Lake Bison herd. Kitaskino Nuwenëné means "our land" in both Cree and Dene.

“This is a truly remarkable accomplishment and I’m thrilled that industry, government and Indigenous communities worked together to make this boreal protection plan a reality. The Kitaskino Nuwenëné Wildland will help sustain local wildlife, protect critical watersheds and ensure the exercise of treaty rights and traditional uses for future generations to come.”

Initially proposed by Mikisew Cree First Nation, the wildland will safeguard their way of life while addressing concerns raised in a 2016 UNESCO report on Wood Buffalo National Park. It adds to the largest contiguous area of boreal protected land in the world.

“I am excited to be working together with the Province of Alberta, Mikisew Cree First Nation, industry partners and other Indigenous communities on this Quick Start project as part of Canada’s Nature Legacy. This is a great example of what can happen when we work together to protect important habitat for species at risk, like caribou and bison. This is an important milestone in creation and conservation which will help us reach our goal of doubling the amount of nature we’re protecting in Canada’s lands and oceans.”

“We applaud the establishment of the Kitaskino Nuwenëné Wildland. Protecting this area is part of Mikisew’s stewardship vision for our lands and waters. This new park will help conserve areas that are important to our people and provide greater certainty that Mikisew ancestral lands can be monitored and better protected. We appreciate the collaborative efforts by industry and the provincial and federal governments to make this park a reality and their recognition of our inherent commitment to protecting our rights, Wood Buffalo National Park, the Peace Athabasca Delta and resources like the Ronald Lake Bison Herd. Articles of the United Nations Declaration on the Rights of Indigenous Peoples are more clearly visible with this successful collaboration.”

By voluntarily relinquishing oilsands and mining leases in response to Indigenous Peoples’ concerns, industry champions Teck, Cenovus Energy and Imperial played a vital role in securing the land base for the new wildland.

“The creation of this new protected area shows what is possible when Indigenous communities, government and industry build strong relationships and work together. Teck is honoured to have worked closely with Indigenous communities, especially the Mikisew Cree First Nation and Athabasca Chipewyan First Nation, to preserve this culturally – and ecologically ­– important region.”

“Imperial is pleased to support the work by the Mikisew Cree First Nation to champion this significant community-industry-government initiative leading to the creation of this new protected area. This area of high biodiversity potential supports the ecological integrity of Wood Buffalo National Park and promotes the long-term stewardship of areas and resources that are critical to the continuation of Indigenous rights and cultures.”

Previously proposed as the Biodiversity Stewardship Area, the new wildland is the result of months of collaborative discussion between Indigenous groups, industry and other stakeholders, and federal and provincial governments, as well as public consultation.