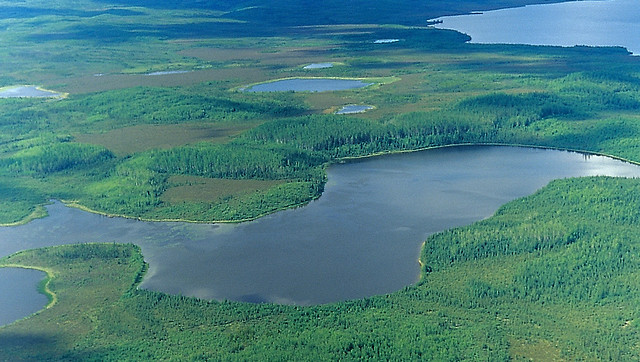 The Caribou Mountains are a part of the world's largest protected boreal forest.

The Government of Alberta partnered with The Government of Canada, the Tallcree First Nation, Syncrude and the Nature Conservancy of Canada (NCC) on the conservation of more than 6.7 million hectares (67,000 sq. km) of boreal forest.

This is the largest addition to the Alberta Parks system in its history, and will constitute the largest contiguous protected boreal forest in the world under the guidelines of the International Union for Conservation of Nature.

“Our government is committed to protecting our land, water and forests for future generations. Preserving these areas has allowed Alberta to establish the largest contiguous boreal protected area in the world. This historic achievement shows what can be accomplished when governments, First Nations, industry and environmental organizations work together.”

“The environment and the economy go together – that’s why our government is investing in protecting nature and wildlife habitat. It’s encouraging to see governments, Indigenous peoples, industry and conservation groups working together to protect this significant part of Alberta’s boreal forest as an important natural legacy for Albertans, Canadians, the world and future generations.”

Identified in the Lower Athabasca Regional Plan (LARP) in 2012, the new parks were fully reviewed to ensure there are no economic impacts on natural resource industries or communities. Industry tenures in the parks were compensated years ago, leaving the lands free for protection.

For the five new and expanded wildland provincial parks, the Government of Alberta proposes to enter into cooperative management arrangements with Indigenous communities. Indigenous advice and knowledge will inform decision-making and management of these lands and the province will provide resources to support this process.

“Our government is listening to the Indigenous peoples of Alberta who share a deep connection with this land. This opportunity for cooperative management will help to enrich and strengthen the planning, management and operation of Alberta’s provincial parks, while also implementing our commitment to reconciliation and our respect for Indigenous heritage and traditional knowledge.”

“This collaboration between the Nature Conservancy of Canada, the governments of Canada and Alberta, and industry are aligned with the Tallcree Tribal Government’s values regarding the preservation of the boreal forest. The boreal forest holds greater value to the First Nation for exercising our traditional way of life and the quiet enjoyment of our treaty rights.”

In addition, Alberta plans to integrate an Indigenous Guardian Program into these wildland provincial parks. Under this program, First Nations and Metis peoples will be hired to monitor the areas, help maintain the lands and provide education and outreach to park visitors.

“The new wildland provincial parks ensure Indigenous peoples have places to hunt and fish with their families for generations to come. The Government of Alberta’s commitment to work collaboratively with Indigenous communities to develop cooperative management plans provides a historic opportunity to have Indigenous knowledge and values influence land-use planning.”

Treaty 8’s Tallcree First Nation, in cooperation with the NCC and the Alberta and federal governments and with support from Syncrude, generously relinquished their Birch River area timber licence and quota to enable one of the new parks (Birch River WPP) to proceed.

“Canada’s boreal forest is unique in the world. The ecological value of this region cannot be overstated—this is a conservation achievement of global significance. Through partnership, we have been able to make a significant step forward in advancing meaningful conservation in Canada.”

In addition, the environmental benefits created through the establishment of the Birch River WPP will provide conservation offsets that Syncrude can apply towards future industrial activities.

“Syncrude is proud to play a role in this remarkable initiative that provides both economic and environmental benefits for Albertans and Canadians. This agreement supports our commitment to responsible development of the oil sands resource while contributing to the conservation of the boreal forest for future generations.”

"Alberta-Pacific Forest Industries Inc. (Al-Pac) extends our support and congratulates the Government of Alberta as it formalizes the creation of the world’s largest network of protected areas in Canada's boreal forest. Al-Pac has long recognized the importance of conservation areas as an integral part of managing human activity in the boreal forest for the long-term benefit of both biodiversity and the economy. "