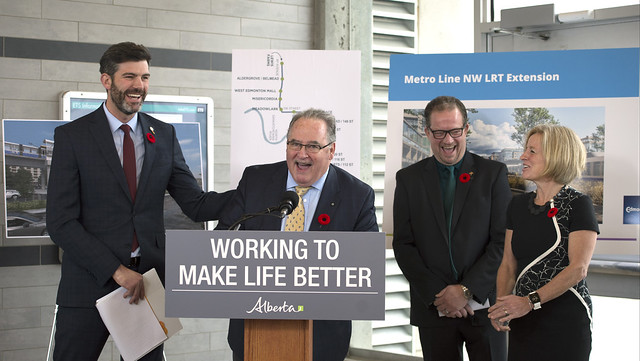 The route expansion will move 60,000 Edmontonians between downtown and Lewis Estates every day, providing a faster commute which will mean more time to spend with families and friends. The province is also investing in the Metro Line expansion from NAIT to the new Blatchford community, which will serve thousands more commuters daily.

“The Valley Line West project is about connecting Albertans from across this region to work, recreation, school and home. As with our support for the Southeast Valley Line LRT, this latest grant will also create much-needed local jobs, support the quality of life in the City of Edmonton and help to protect our environment now and in the future.”

The finished route will bring suburban communities and the city’s core together, running from Mill Woods through downtown to the west end, with connections to LRT and bus routes covering the entire city. The 14 stops include West Edmonton Mall, the Misericordia Hospital and the Brewery District.

“The Valley Line West LRT is a priority for the city and for our government because it will provide an extended, affordable, accessible and environmentally sustainable transportation option in Edmonton. This funding supports our government’s commitment to invest in today’s public transportation to meet the needs of our growing population.”

The Alberta government is investing $1 billion, or 40 per cent, of the city’s expected $2.6-billion Valley Line West LRT expansion cost. The province’s commitment to the Metro Line totals $131 million of the $328-million project.

"We are planning and building a city for more than a million people, and with commute times getting longer each year, now is a critical time in Edmonton’s growth to ensure we have a robust transit network in place. Today's announcement by the province helps us get one step closer to that goal, and we look forward to continuing to work with them on these types of critical infrastructure investments.”

“The governments of Alberta and City of Edmonton share our vision of evolving urban public transit systems that provide more seamless mobility options for all users.”

The Government of Alberta will continue working with the City of Edmonton as detailed plans and finances for the city’s full LRT expansion are developed.