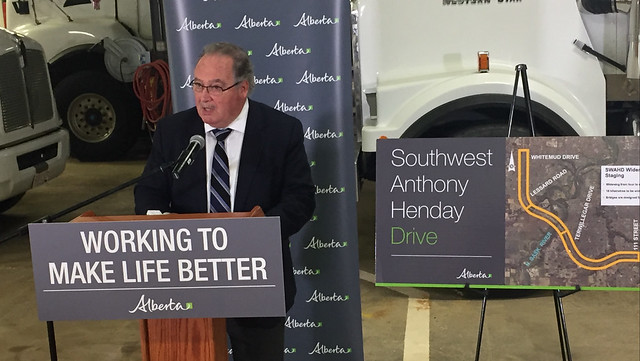 Budget 2018 included funding to expand the southwest portion of the ring road from four to six lanes. With design work expected to be finalized later this year, construction for the project is expected to begin in 2019. It is anticipated that the project will take three years to complete.

“We know Edmontonians want to spend less time in traffic and more time with their families. That’s why we are making this crucial investment in a major motorway in this city. By widening the Henday, we will also be able to help businesses move their goods and services efficiently.”

“Southwest Edmonton is the fastest growing area of our city, and I know that today's announcement will lead to relief for commuters using the route in the future as our neighbourhoods continue to be built.”

“The Government of Alberta’s commitment to our highway network supports job creation and develops opportunities in the construction and engineering industries. Our contractors are proud to work with government to improve our highway network, improve safety and keep Albertans on the move.”

“The AMTA works with Alberta government and industry to identify issues and find solutions to ensure goods moved across the province get to where they need to go safely and efficiently. The Alberta government’s continuing roadway improvements are vital to the safety of commercial drivers and the motoring public. Improvements like the widening of the southwest leg of Anthony Henday Drive are necessary to continue our goal of injury reduction and focus on Vision Zero.”

The Anthony Henday Drive is a vital part of Alberta’s provincial highway network, improving market access and quality of life for Albertans and ensuring the long-term economic viability of the Edmonton metropolitan region.