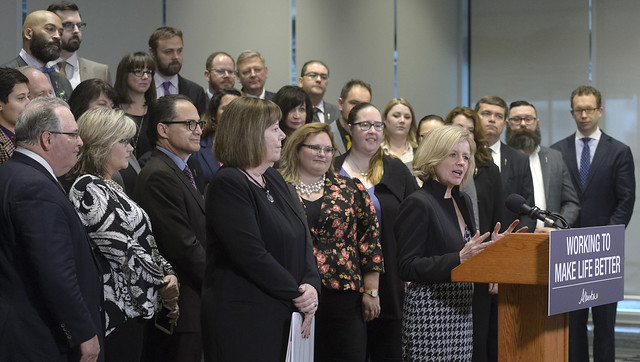 Premier Notley and Minister McCuaig-Boyd announce new legislation giving Alberta the power to control the oil and gas resources that belong to all Albertans.

In the face of ongoing challenges threatening the construction of increased pipeline capacity, the Alberta government is acting to defend its energy industry.

“This is about protecting the jobs and livelihoods of thousands of Albertans and our ability to keep Canada working. It’s simple – when Alberta works, Canada works. We did not start this fight, but let there be no doubt we will do whatever it takes to build this pipeline and get top dollar in return for the oil and gas products that are owned by all Albertans.”

Roadblocks put in place by the British Columbia government have caused uncertainty and hurt investor confidence, resulting in pipeline delays that have caused the Canadian economy to lose out on millions of dollars in revenue every day. That revenue could have been used to build roads, schools and hospitals. These delays are also affecting the hundreds of thousands of jobs that help put food on the table and a roof over the heads of families across the country.

The government made it clear through its throne speech that it would not hesitate to take bold action similar to the action former Premier Peter Lougheed took when Alberta’s energy industry was threatened in the past.

If passed, the legislation would give the government authority to, if necessary, require any company exporting energy products from Alberta to obtain a licence. These products include natural gas, crude oil and refined fuels, such as gasoline, diesel and jet fuel. Export restrictions could be imposed on pipelines, as well as transport via rail or truck.

This licence would be issued by the minister of energy if it is determined to be in the public interest, including whether adequate pipeline capacity exists to maximize the return on these resources produced in Alberta. Companies would not be automatically required to apply for an export licence and would only be directed to do so if the minister deemed it necessary.

“Every day, we’re leaving money on the table due to a lack of pipeline capacity, and that needs to stop. We’ve said all along there would be no surprises for our energy sector, and we’ve engaged with them throughout this process. The powers in this legislation are not powers Alberta wants to use, but we will do so if it means long-term benefit for the industry, for Alberta and for Canada.”

Consideration would also be given to ensuring enough supply is maintained for Alberta’s needs, now and into the future. A licence could be issued to a company but for a lower amount than it has previously been exporting.

As of December 2017, the existing Trans Mountain Pipeline shipped on average:

Approximately 80,000 barrels a day of refined fuels goes to B.C. on all modes of transportation, based on internal government estimates.