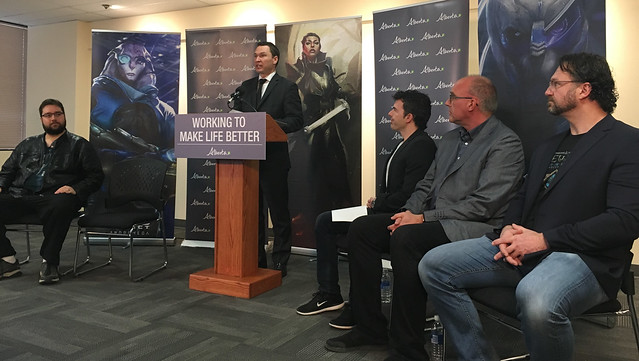 If passed, the bill would create a new Interactive Digital Media Tax Credit (IDMTC) to help Alberta’s businesses compete with other provinces like Ontario, British Columbia and Quebec, which already provide similar incentives.

“Our digital media entrepreneurs are making the province proud, attracting international attention and investment. They have created hundreds of good jobs for Albertans, while developing products that entertain countless people around the world. We want to give local talent more opportunities to succeed right here at home – that’s why we will level the playing field with a credit that will help hire and retain the best in the business.”

The IDMTC would refund Alberta digital media companies 25 per cent of the salaries, wages and bonuses they pay their Alberta employees who work directly to create interactive digital media products.

“For Serious Labs, a groundbreaking virtual reality training company based in Edmonton, the new IDMTC would help ease the strain of our 100 per cent year-over-year staff growth rate. The demand for our industrial Virtual Reality simulators is enormous, and we require more and more highly qualified and experienced developers to design and build them. Government assistance in helping us expand and retain our talent pool is greatly appreciated.”

The credit would also make it easier for local entrepreneurs to open new studios and attract investment from other jurisdictions.

“This is a truly exciting time for our industry. This new credit means more investment in Alberta and great new job opportunities in a dynamic and forward-looking field. BioWare started right here in Alberta and it’s great to see the supports put in place that allow both established companies and new startups to thrive.”

There are more than 50 interactive digital media studios in the province today, with more than 500 full-time employees earning an average of over $70,000 a year. The industry contributes roughly $80 million to Alberta’s annual GDP.

“Since the video game market is worldwide, the potential for growth is very high – we think the government will see a good return on its investment in Alberta video game developers through this tax credit program. We’re happy to see the Alberta government taking a competitive approach to growing Alberta’s video game development industry by coming alongside tax credit programs that have long been in place in other Canadian provinces. Edmonton is already on the development map, but it would be great to see that reputation grow much further, and to see the industry grow all over Alberta. We’re excited to see how this program will help local studios to expand, both in size and ambition, as we bring our games to a global, highly competitive market.”

The Growth and Diversification Act would also offer digital media companies an extra five per cent refund for payroll costs of under-represented workers, including women, Indigenous people and people with disabilities.

The CITC program has already helped 35 Alberta companies take on new major construction projects and upgrades, which are expected to support thousands of new jobs and contribute more than $1 billion to the province’s GDP.