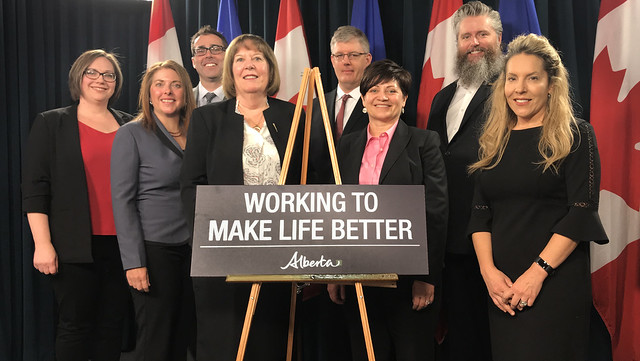 If passed, The Energy Diversification Act would launch a second round of the Petrochemicals Diversification Program and establish a Feedstock Infrastructure Initiative to help deliver the natural gas components needed for more private investment in value-added development. The government would also initiate a Partial Upgrading Program, as announced on Feb. 26.

“We’re taking bold steps to help the energy industry innovate and diversify. These measures are not one-off fixes — they’re part of our made-in-Alberta plan for a more diversified and resilient economy that’s built to last — one where no Albertan is left behind.”

Renewal of the Petrochemicals Diversification Program would encourage development of value-added processing of Alberta-based resources, further broadening Alberta’s recovery and diversification. This would build on the successful first round, which awarded support to two projects expected to create more than 4,000 construction jobs and over 200 full-time jobs during operation.

Support for a Feedstock Infrastructure Initiative would encourage industry to move forward on the facilities and infrastructure needed to capture more natural gas liquids required for value-added development. This includes components such as ethane, methane and butane.

“We commend the government for this bill that would enable Alberta to build on its strengths to attract new investment and add value to our energy resources. New petrochemical and hydrocarbon investments in Alberta will result in a stable source of revenue for the province, create long-term, high-paying jobs and support many small-to-medium businesses.”

”We’re pleased with the potential impact these programs could have on future investment in Alberta’s Industrial Heartland. Supporting increased investment in the downstream sector boosts our local economy and creates new opportunities that benefit not only our industry partners, but our whole community.”

As recently announced, the Partial Upgrading Program would help support full-scale commercialization of partial upgrading technologies through the construction of two to five facilities, representing up to $5 billion in private investment, 4,000 jobs during construction and 200 full-time jobs during operation.

The initiatives that would be enabled by this proposed bill support the vision of the government’s throne speech and build upon recommendations from the Energy Diversification Advisory Committee. Further details will be announced next week.

The Petrochemicals Diversification Program will encourage the development of value-added petrochemical manufacturing in Alberta.

Two projects were selected under the first round of this program, which began in 2016. Construction has already begun on a $3.5-billion propane dehydrogenation facility and polypropylene facility in the Industrial Heartland. The complex will process propane into a more valuable product that is used to manufacture plastics products, including packaging and automotive parts.

When it first launched, the program received roughly twice the interest the government had expected, with applications representing an estimated $20 billion in private investment.

A Feedstock Infrastructure Program will help industry move forward on the facilities and infrastructure needed to capture more natural gas liquids required for value-added development. This includes components such as ethane, methane and butane.

Ethane and other components are separated or processed from natural gas in a variety of ways, often at a large-scale processing facility, but it can also occur in smaller facilities located closer to the production site.

Straddle plants extract certain natural gas liquids, including ethane, from major natural gas transmission pipelines and then ship them to other processing or manufacturing plants.

This program will encourage industry to develop more of the facilities needed to capture these important raw ingredients instead of relying on imports from the United States and elsewhere.

Partial upgrading reduces the thickness of oil sands bitumen so it can flow through pipelines more easily, without having to be blended with diluent. This increases the volume of bitumen product that can be shipped through pipelines.

EDAC was appointed by government in October 2016 with a mandate to engage Albertans and explore opportunities to increase the value of our energy resources, create jobs and attract new investment.

The committee submitted its final report in December 2017, including 36 recommendations. The government has accepted the committee’s advice and is moving forward immediately on a number of fronts.