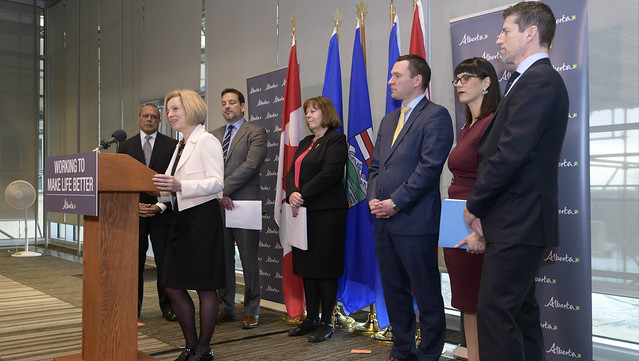 Premier Rachel Notley announced that support for full-scale commercialization of partial-upgrading technologies will be among the government’s next steps toward energy diversification, taking action on recommendations from the Energy Diversification Advisory Committee (EDAC).

“We are blessed with a greater variety of natural resources than anywhere in the world, but right now we’re not getting full value for them. As we fight for new pipelines and a better price for our oil, we must also create the right conditions for investment and jobs in oil and gas processing and manufacturing. This is the same vision Premier Lougheed had for Alberta, and I’m proud to move that vision closer to reality.”

“I’d like to thank the committee and the many Albertans who contributed to these recommendations. Today’s announcement is the first of several steps we are taking to secure Alberta’s future and get off the boom-and-bust rollercoaster. Energy diversification will ensure our economic recovery is built to last - not just for a few years, but for generations.”

In addition to support for the commercialization of partial upgrading, work is underway to ensure companies have access to the natural gas liquids they need to grow private investment in Alberta-based natural gas processing and to build on the early success of Alberta’s Petrochemicals Diversification Program. Details will be announced in the coming weeks.

“The deep history of NOVA Chemicals stands as a success story for diversification in this province. We have seen the positive impact of employing Alberta's considerable resources, innovative technology and talented people to encourage billions in new investment, ensure high-paying jobs for Albertans and create lasting growth in our communities. This government’s efforts to implement the EDAC report will build upon Peter Lougheed's legacy, creating the next generation of value-added opportunities and allow companies like ours to continue to grow here in Alberta.”

“Today’s endorsement of partial upgrading is a key first step in response to our recommendations for transforming Alberta into the premier destination for downstream oil and gas investment. Thousands of working families rely on resource development to build their livelihood, and I sincerely hope this report helps guide policy decisions for many years to come.”

“Alberta needs to begin preparing now for the global energy economy of the future. This means building on our existing strengths, which include a wide variety of resources, a skilled workforce and a world-class petrochemical industry. The initial response is a great sign the government is focused on made-in-Alberta solutions for securing a more diversified energy sector.”

“Adding value to our resources adds jobs, infrastructure and investment to our communities. Alberta’s Industrial Heartland is a key driver of the province’s economy, with potential for $30 billion in new investment by 2030, and we’re pleased with the government’s direction in working with us to attract these investments.”

The government will support up to $1 billion for partial upgrading over eight years beginning in 2019-20, which will include a variety of fiscal tools including loan guarantees and grants. This will leverage construction of two to five partial upgrading facilities, representing up to $5 billion in private investment, 4,000 jobs during construction and 200 full-time jobs during operation.

A study by the University of Calgary estimated the impact of partial upgrading could be worth up to $22 billion in GDP growth for Alberta over 20 years.

Partial upgrading reduces the thickness of oil sands bitumen so it can flow through pipelines more easily, without having to be blended with diluent. This increases the volume of bitumen product that can be shipped through pipelines. Partial upgrading would enhance oil sands industry competitiveness by reducing industry costs, increasing pipeline capacity and enabling more refineries to process Alberta bitumen product. It would not limit future opportunities for full refining within Alberta.

EDAC was appointed by government in October 2016 with a mandate to engage Albertans and explore opportunities to increase the value of our energy resources, create jobs and attract new investment.

The committee has submitted its final report, including 36 recommendations. The government has accepted the committee’s advice and is moving forward immediately on a number of fronts.