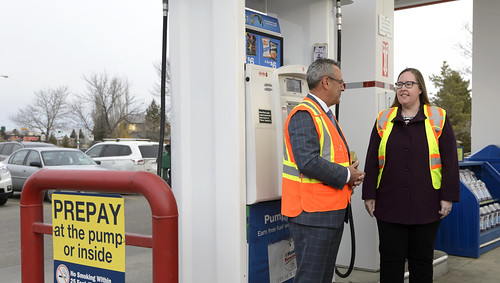 Lawrence Richler meets with Minister Gray at the Brookview Husky in Edmonton to discuss measures to improve worker safety at fueling stations.

If passed, An Act to Protect Gas and Convenience Store Workers would amend the Occupational Health and Safety Code to include mandatory pre-payment for fuel. Violence-prevention plans would also become mandatory at retail fuel and convenience stores.

Over the past three years, “gas-and-dash” incidents and robberies at both urban and rural locations in Alberta have resulted in five worker deaths and serious injuries to three other workers.

“As Albertans, our hearts break when we see incidents of violence involving workers. That’s why we are taking action to increase safety for retail fuel and convenience store workers by introducing mandatory violence-prevention plans and pre-payment options for fuel. This legislation would better protect workers and prevent violent incidents from happening in Alberta.”

If passed, the new measures are expected to go into effect June 1, 2018. Where pay-at-the-pump technology is not available, retailers can institute other options such as requiring customers to deposit cash or a credit card with the cashier before fueling begins. Several fuel retailers in Alberta have already established, or are working to establish, mandatory fuel pre-payment polices.

“Pre-payment eliminates the risks associated with fuel payments, and we applaud the government for taking this important step to protect attendants and the public. We believe this is the right thing to do – and so do the people working at our stations.”

“A safe store environment is paramount to 7-Eleven Canada and we believe pre-payment of fuel purchases will improve employee and public safety in Alberta. For many years, 7-Eleven Canada has run an employee safety program similar to the safety plan announced today. It stems from our commitment to our employees and the communities we serve.”

“Co-ops have always placed the highest priority on employee and customer safety and remain committed to that priority. FCL appreciates the consultation that led to this measure and will work with retail co-ops in Alberta to ensure compliance while providing the full service and quality products that Co-op customers expect."

Fuel theft and violent incidents at gas stations and convenience stores are a significant concern for law enforcement. The rates of fuel theft incidents reported to police in Alberta rose between 2011 and 2015. The Alberta Association of Chiefs of Police estimates there were over 4,000 incidents across the province in 2015, an average of 12 fuel thefts per day.

“In addition to the highest priority of saving human lives and reducing trauma, mandatory pre-payment for fuel will save Alberta’s police services hundreds of hours spent responding to and investigating gasoline thefts – hours that would be put towards high-priority public safety issues.”

Alberta’s Occupational Health and Safety (OHS) legislation requires employers to take all reasonable steps to protect the health and safety of their workers. Violence-prevention plans help employers reduce the potential for violence through a combination of physical and procedural control measures.

The proposed legislation follows stakeholder discussion sessions and inspections by OHS officers conducted in 2016 and 2017. To learn more, visit alberta.ca/gas-station-worker-safety.