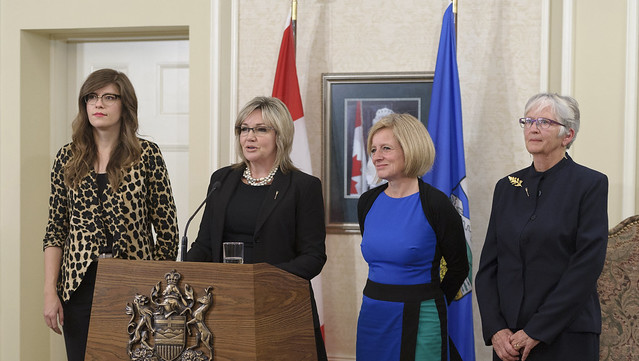 “Alberta’s economy is looking up, but there is more work to do – especially in Calgary, where too many skilled people are still looking for work. That’s why I’m appointing Sandra Jansen, an experienced and well-known champion for Calgary, as our new Minister of Infrastructure. Sandra will oversee our job-creating capital plan and I’m asking her to carry out this work with a specific eye to projects that create jobs in Calgary, such as the Green Line.”

“Jobs and economic recovery are a top priority for Albertans and for our government. I am excited about the opportunity to work with the Premier and my colleagues to make Albertans’ lives better, building the schools, hospitals and economic infrastructure we need to create jobs and keep Alberta growing.”

Other cabinet details and changes made today by Premier Notley include:

MLA Sandra Jansen is a longtime resident of Calgary. She was a journalist for 23 years, including 10 years as a national news anchor for CTV News Channel in Toronto. MLA Jansen has a diploma in broadcasting from the Southern Alberta Institute of Technology and a master’s degree in professional communications from Royal Roads University. She also studied French at McGill University.

Her most recent legislative accomplishments include co-sponsoring Justice Minister Kathleen Ganley's Bill 2 - An Act to Remove Barriers for Survivors of Sexual and Domestic Violence and sponsoring Bill 205 - Advocate for Persons with Disabilities Act.

MLA Jansen is a dedicated volunteer and has devoted her free time to support numerous Calgary charities as a spokesperson and volunteer for the United Way, Calgary Health Trust and the Ronald McDonald House, as well as being a board member for the Calgary’s Girl School.

MLA Jessica Littlewood has experience in the business world working for an accounting firm and in the not-for-profit and public service areas, working for Goodwill Industries and as a nursing attendant.

She serves as chair of the Select Special Ethics and Accountability Committee and as a member of the Standing Committee on Legislative Offices.

MLA Littlewood lives in Fort Saskatchewan with her family.

MLA Annie McKitrick has over 40 years of experience working with municipalities, provincial government, post-secondary institutions and not-for-profit organizations. She has a master’s degree (Education) from the University of Victoria and a bachelor of science (Ecology) from McGill University.

MLA McKitrick has worked in many places around the world. She was a researcher in Kyrgyzstan, coordinated projects in Thailand and worked with refugee and community development programs in Southeast Asia. She is fluent in French and also speaks Thai.

MLA McKitrick resides in Sherwood Park with her family. She can often be seen at one of the beautiful recreation areas in Strathcona County, on her bike in the summer and her cross-country skis in the winter.

MLA Brian Malkinson has deep roots in Calgary. He is a third-generation Calgarian and is proud his grandparents have called northwest Calgary home for more than 50 years.

In his spare time, MLA Malkinson can be found tinkering on his current project car or with friends playing rec-league sports.

MLA Estefania Cortes-Vargas worked as an educational assistant for the Edmonton Public School Board for more than four years. MLA Cortes-Vargas attended the Social Work Program at MacEwan University. She also has experience as a facilitator with the Multicultural Health Brokers Co-operative.

MLA Cortes-Vargas serves as deputy chair of the Special Standing Committee on Members' Services and as a member of the Select Special Ethics and Accountability Committee. MLA Cortes-Vargas was named Government Caucus Whip on March 8, 2016.

Listen to the swearing-in ceremony