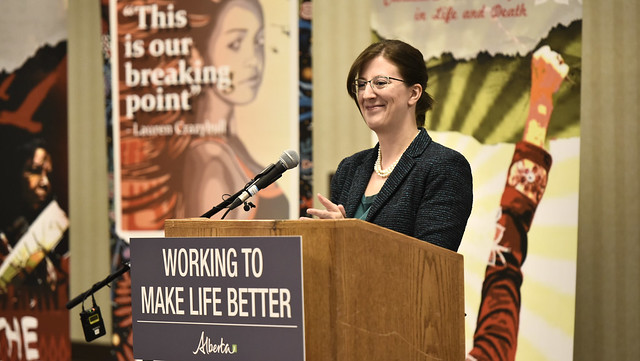 The Institute for the Advancement of Aboriginal Women (IAAW) will use a $100,000 grant to build a collaborative strategy to support more Indigenous and immigrant women, especially in rural areas, become leaders in their communities and, ultimately, run for elected office.

The strategy includes practical ways, such as a buddy system and women’s circles and leadership workshops, to support women along their leadership journey — from volunteering and serving on community leagues and boards, to running for local councils, provincial or federal governments.

Leadership workshops geared towards Indigenous women begin in November, with another series in January geared towards immigrant women. They will include panel discussions and training on public speaking and making your voice heard.

“When leaders reflect the community they serve, they can make better decisions for everyone. I am proud to support more Indigenous and immigrant women to become active in shaping the future of their communities and make life better for all Albertans.”

“Collaboratively with other women's organizations, we plan to build the confidence and skills in women to increase their opportunity to be involved in decision-making that affect them and their families.”

Women are under-represented in leadership positions in Alberta, especially on municipal councils. In the 2013 municipal elections, Albertans elected women to 490 of 1,874 positions – an average of 26 per cent.

About Status of Women grants

Status of Women’s first-ever grant program funds 34 innovative projects by not-for-profit and charitable organizations for a total of $1.5 million in the 2016-17 fiscal year.

Successful projects, such as the Indigenous Women in Leadership project, increase the number of women in leadership roles. Other grants have supported Indigenous women’s leadership in Grande Prairie and training and peer-mentoring for Indigenous women to start their businesses and create jobs.