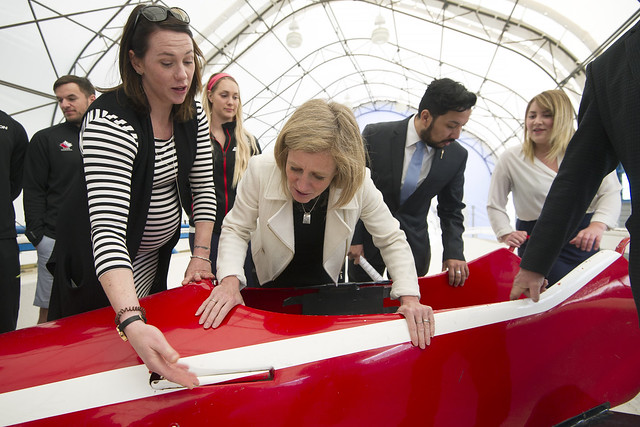 Premier Notley inspects a bobsleigh at WinSport in Calgary

The funding, part of the Government of Alberta’s Capital Plan, will assist with refurbishment of the sliding track at WinSport.

“As we celebrate Canada’s 150th anniversary, we recall the incredible pride of all Canadians in the historic successes of our nation’s athletes on the bobsleigh, luge and skeleton tracks, many of whom trained on this very sliding track. As aspiring athletes from our province and our country continue to develop their skills in a world-class facility, we can look forward to many more of those golden moments. This investment in WinSport also means new tourism and business opportunities supporting a diversified economy for a more secure future and a better life for Albertans.”

“The modernization of the sliding track will solidify Canada Olympic Park as a premier venue for national and international competition, attracting athletes and fans from around the world. With WinSport already generating $120 million in annual economic impact and providing 1,200 full-time equivalent jobs, this is an investment in not only sport but in the growth of the local and provincial economy.”

The project is currently in the pre-engineering design phase. There are two components to the initiative: an upgrade of the refrigeration system to an indirect cooling system and track alteration to bring it in line with current Olympic standards.

“The refurbishment of our track helps us support our purpose of inspiring and activating human potential through the spirit of sport, while maintaining our standing as a world-class facility. WinSport continues to be a living legacy of the 1988 Olympics and we look forward to providing a place for Canadians to discover, develop and excel at sport for generations to come.”

WinSport (formerly the Calgary OIympic Development Association) is a not-for-profit organization founded in 1956 to bid on behalf of Calgary to host an Olympic Winter Games. WinSport now owns and operates Canada Olympic Park in Calgary, the Bill Warren Training Centre at the Canmore Nordic Centre in Canmore and the Beckie Scott High Performance Training Centre on Alberta’s Haig Glacier. WinSport also funds two-thirds of the operating budget for the Olympic Oval at the University of Calgary.

According to “Economic Impact of WinSport on the Calgary Economy” a study conducted by the City of Calgary and supported by Calgary Economic Development, direct and indirect economic impacts of WinSport and its partner organizations include:

History of the sliding track

The sliding track at WinSport is one of the original facilities from the 1988 Winter Olympic Games. It has served as a cornerstone asset of Canada Olympic Park for almost 30 years and has provided general recreation and entertainment, athlete development and training for thousands of athletes over the years. It has also allowed Canada Olympic Park to become the home of Canada’s national bobsleigh, skeleton and luge teams and has allowed Alberta to host numerous national and international sporting events since the 1988 Games, including World Cups and National Championships.