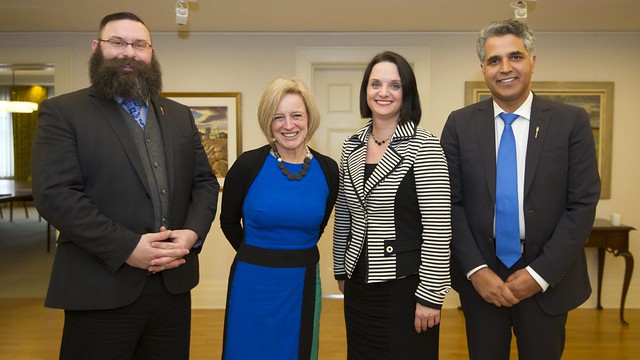 The Notley government is focused on creating a child protection and intervention system that serves the needs of Alberta children and families and is accountable for the protection of children.

Three ministers were sworn into new roles at Government House in Edmonton on Jan. 19.

Shaye Anderson will serve as Minister of Municipal Affairs. He will also join Minister Larivee on the Municipal Governance Committee.

Human Services will be renamed “Community and Social Services” and will continue to be led by Minister Irfan Sabir.

“All children deserve to be safe, secure and happy. We want to support our most vulnerable children and ensure they never go to bed hungry or scared. Today’s announcement means we will have more resources and more attention dedicated to taking care of our children and our communities. Minister Larivee will provide thoughtful, compassionate leadership as she works to fix our child intervention system. Minister Sabir will continue with the very capable leadership he provides to his ministry, which has been suitably renamed “Community and Social Services.” I welcome Shaye Anderson to the cabinet table, I know his ample community engagement experience and enthusiasm for rural Alberta will ensure his success as he navigates his new role.”

Shaye Anderson was elected to the Legislative Assembly of Alberta as the Member for the constituency of Leduc-Beaumont on May 5, 2015. He has since served as the Vice Chair of the Public Accounts Committee, and a member of Alberta’s Economic Future policy committee. He was also the co-sponsor of the Modernized Municipal Governance Act. He was appointed Minister of Municipal Affairs on Jan. 19, 2017. Anderson moved to Edmonton in 2004 and shortly after put down roots in Beaumont with his wife, Kelly, and two boys.

The Malaspina University-College grad has a diploma in physical education and also attended the University of Victoria for the Bachelor of Education program. Before being elected, he worked with Telus as a telecommunications technician, installing and repairing residential and business services in the County of Leduc.

Danielle Larivee was elected to the Legislative Assembly of Alberta as the Member for the constituency of Lesser Slave Lake on May 5, 2015. She was appointed Minister of Children’s Services on Jan. 19, 2017. She previously served as Minister of Municipal Affairs and Minister of Service Alberta.

Before serving with the Legislative Assembly of Alberta, Larivee worked for more than 17 years as a registered nurse with Alberta Health Services. During this time, she spent two years working in home care for the Driftpile First Nation and two years as a licensed practical nurse (LPN) instructor with Northern Lakes College. An active member of her community, she served as treasurer for her local chapter of Mothers Against Drunk Driving (MADD) from 2013 to 2015, as chair of the Lesser Slave Lake Regional Wellness Advisory Committee from 2014 to 2015 and as president of local 315 of the United Nurses of Alberta from 2011 to 2015.

Larivee holds a Bachelor of Science in midwifery from the Midwives College of Utah and a Bachelor of Science in nursing from the University of Alberta. She also is an alumna of the TUXIS Parliament of Alberta. Larivee, together with her three children, resides in Slave Lake, a place she has called home for more than 35 years and a community abundant with rivers and lakes that she enjoys kayaking whenever she has the opportunity.

Irfan Sabir was elected to the Legislative Assembly of Alberta, representing the constituency of Calgary-McCall, on May 5, 2015. On May 24, 2015 he was appointed as Minister of Human Services, and on Jan. 19, 2017 he was sworn in as Minister of Community and Social Services.

Before serving with the Legislative Assembly, he practised aboriginal law at a national law firm in Calgary beginning in 2012. Before that he worked as a research assistant with the Faculty of Law at the University of Calgary (U of C).

He also worked with the Salvation Army for five years.

Born in Rawalakot, Azad Kashmir, Pakistan, he has called Calgary home since 2004.