The parties have signed a memorandum of understanding (MOU) broadly agreeing to work together on initiatives to improve public safety for members of the Siksika Nation. More specifically, discussions between the parties will focus on developing a funding framework for a new police service in Siksika.

Establishing a self-administered police service is consistent with the MOU’s guiding principles, which call for Siksika-driven programs and services to address the community’s public safety concerns.

“The Siksika Nation has identified establishing a police service as a priority for making its communities safer, and Alberta’s government believes in working with communities to help them address important public safety needs. We’re looking forward to productive discussions that will help the Siksika Nation realize its goal of building a safer community for its members.”

“Alberta’s government is proud to support initiatives that foster self-determination and community-led solutions. This MOU is a meaningful step on the path toward true reconciliation.”

“It is critical we have our own force back on the Nation. Our own force will reduce response time from police, which could save lives in those critical minutes or seconds in life-threatening situations. From a cost perspective, it would also be more efficient, as our own force would provide more preventative measures and not simply reactive measures to the community. The future is extremely bright for Siksika, and we are excited to continue to work with the Alberta and federal governments to develop the best outcome for all involved.”

Alberta and the Siksika Nation are working toward their own agreement because a federally administered program that provides funding for Indigenous police services has been frozen. 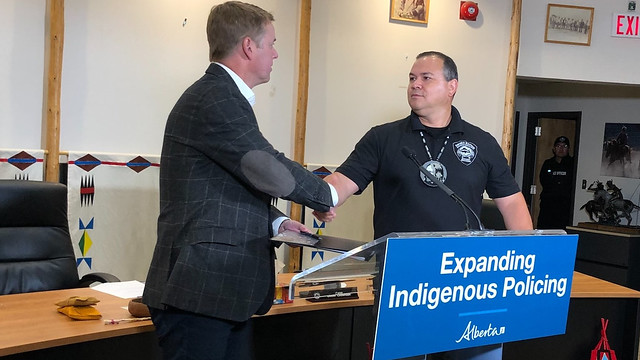 The Siksika Nation had its own police service from 1992 to 2002, but the 10-year tripartite agreement that established the organization wasn’t renewed. The RCMP detachment in Gleichen has been responsible for policing in Siksika since 2002.

The Siksika Nation has explored the possibility of establishing a new police service in recent years. In 2018, it hired an outside firm to conduct a feasibility study. The provincial government contributed $30,000 toward the study, a third of the cost.

Since then, the Siksika Nation has done additional research on establishing a self-administered police service, including a recent business case. However, the Sikiska Nation can’t proceed under the First Nations and Inuit Policing Program because the federal government has frozen the program while it conducts a review.

Although talks between Alberta and the Siksika Nation are focused on developing a funding formula that does not rely on the First Nations and Inuit Policing Program, the MOU also directs the parties to identify other possible sources of funding from the federal government and existing initiatives.