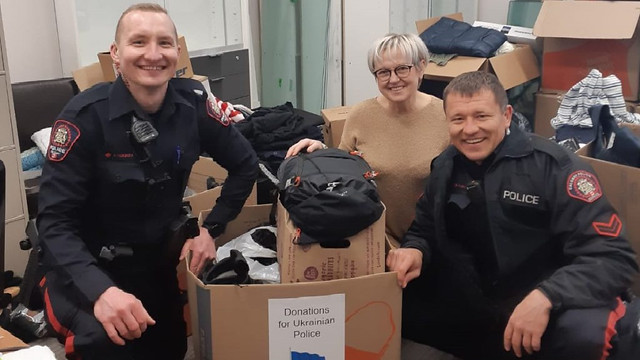 Building on a successful donation drive by a group of Calgary Police Service (CPS) employees, law enforcement agencies across the province have collected extra and decommissioned gear like body armour, helmets, boots and clothing items for another shipment to Ukraine.

“The people of Alberta’s police services work diligently every day to protect others, so I’m not surprised they’ve answered the call to help save lives on the front lines in Ukraine. I’d like to thank the Calgary Police Service for organizing the recent donation drive among its members, as well as the Alberta police services that are currently gathering equipment for another humanitarian shipment to Ukraine. I’m proud of them and grateful for their efforts.”

“As chair of the Advisory Council on Alberta-Ukraine Relations, I am thrilled by this announcement and know that this equipment will be of great benefit to those fighting against the Russian invasion of Ukraine.”

“We are grateful to police services across Alberta for their generous donations of tactical gear and protective clothing to help Ukraine during this most difficult time. Further humanitarian aid is urgently needed amid Russia’s full-scale invasion to keep Ukraine’s civilians, front-line police officers and defenders safe. We greatly appreciate the ongoing efforts by law enforcement agencies across the province.”

“I’m extremely proud of the Calgary Police Service members who started this clothing drive, as well as those who donated items. Boots, hats, shirts, gloves and other basic items can make a world of difference to someone who is working to keep their community safe, especially during such a significant conflict. We are part of a larger global family and will support our Ukrainian policing partners in any way we can.”

A large part of the effort was spearheaded by a group of CPS officers and civilian employees with personal and professional ties to Ukraine and the surrounding region. Organizers placed donation bins at CPS facilities across the city, which resulted in officers contributing more than 450 kilograms of items like boots, pants, shirts, tuques, gloves and socks that they no longer need.

In March, the gear donated by CPS officers was sent to Poland for distribution in Ukraine. The shipment left on a flight from Edmonton – but not before the Edmonton Police Service added 60 sets of soft body armour, 98 hard armour plates and some ballistic helmets that the organization had deemed surplus.

“Sending tactical equipment to Ukraine is just one way we can provide support. The impacts of this crisis have been felt deeply within our service and across the larger community in Edmonton, and we hope that this can make even the smallest difference for those in need abroad.”

Since that initial load, more police services have collected items for another shipment to Ukraine that will be arranged by volunteers at CPS. Although the donated tactical gear is considered surplus due to its age or technical specifications, the equipment is still fully functional and provides adequate protection. Any police insignias and identifying marks are removed prior to donation.

“The Camrose Police Service is proud to join our brothers and sisters in law enforcement to support this initiative and contribute to the Ukrainian people in their brave fight for freedom.”

“Even though we are one of the smallest police services in Alberta, we felt we should do what we could to join our Alberta policing partners in this call-out for assistance.”

In Lethbridge, the police service donated 40 sets of body armour equipped with plates, as well as 25 pairs of boots. 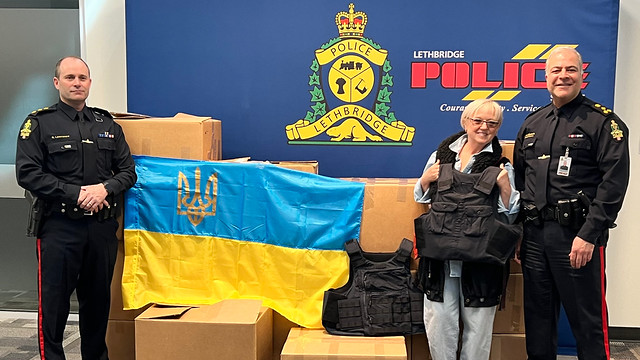 “Our hearts are heavy for the people of Ukraine and we are honoured some of our gear will be able to help front-line police officers. We hope our contribution will keep them safe during these challenging times.” 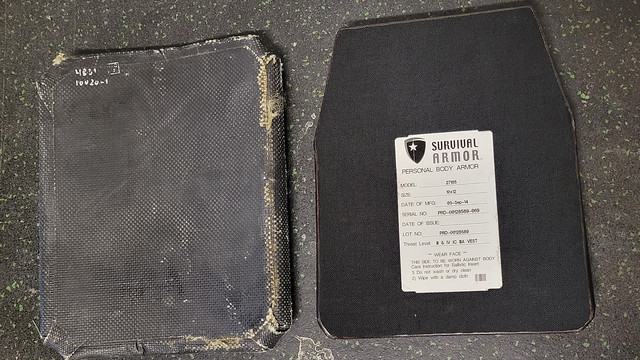 “The Medicine Hat Police Service is proud to join other law enforcement agencies across Alberta in donating used ballistic personal protection body armour to be used to enhance the safety of the citizens of Ukraine during the ongoing war.”

“It is our hope the equipment provides some safeguard to those brave individuals fighting for their country’s freedom.”

RCMP detachments in Alberta are also collecting items for shipment to Ukraine through an effort coordinated by the RCMP’s national headquarters in Ottawa.