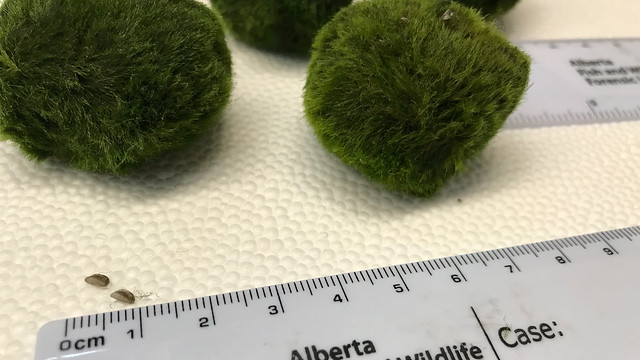 Live zebra mussels, which are an invasive species, have been discovered in moss (marimo) balls, a spherical, plant-like algae commonly sold at pet and garden stores throughout North America, including in Alberta.

Albertans should destroy moss balls by freezing or boiling them, then placing the moss balls in a sealed plastic bag and disposing of them with their household trash. Moss balls, and any water they were in, should not be flushed down the toilet, put down a drain or placed in a compost.

Please read the instructions on treating and disposing of water that may have been exposed to zebra mussels. Aquarium owners should also inspect their aquariums when preforming regular maintenance, such as water changes, for any organisms that were not intentionally put into the tank.

“Invasive mussels pose a serious threat to Alberta’s aquatic ecosystems and fisheries. They can cause millions of dollars in damage to water infrastructure, such as irrigation canals. Our efforts in past years coupled with the cooperation of Albertans have meant that Alberta remains largely free of zebra mussels. While retailers and distributors across the province have been proactive in removing moss balls from store shelves, we are asking Albertans to take action to ensure zebra mussels are not inadvertently released into our environment.”

With shells measuring up to three centimetres, zebra mussels are difficult to spot – but their small size doesn’t stop them from being destructive. They can clog water intake pipes, disrupt natural food chains and affect recreation areas when dead shells wash up on shores. Zebra mussels multiply rapidly and are extremely difficult to eradicate once established in an area.