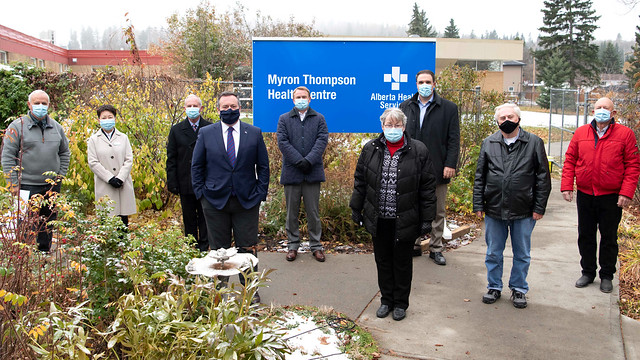 “We are connecting this place of care, healing and hope to the memory of Myron Thompson. By putting his name on this hospital, we will remember the man who dedicated his entire adult life to his community. Myron was Sundre’s most famous son. He had a huge heart, and personified Alberta’s ethic of community service.”

His distinguished 50-year career and passion for public service – as a school teacher and principal, town councillor and mayor of Sundre, on top of his 15 years as a member of Parliament – is being recognized through the renaming of the Sundre Hospital and Care Centre.

“Mr. Thompson chose Alberta as his home, and fought passionately to make life better for all his neighbours. As a leader in both federal and municipal politics, he served the community for over 50 years. It is fitting that his name and cowboy-politician legacy will live on through this hospital.”

“Myron Thompson is an Alberta original. He took his heart and charisma to Ottawa, representing Alberta and the residents of his community with his honest voice and sincerity. I’m very pleased to see his significant contribution to public service commemorated in this way.”

Myron Thompson was born in Colorado in 1937. He served in the United States Marine Corps during the Korean War, and was a semi-professional baseball player, once famously trying out for the New York Yankees. He moved to Sundre in 1968, where he was the longest-serving principal of the local high school, becoming a formative figure for generations of Sundre students. He went on to serve several terms as Sundre’s longest-serving mayor, and from 1993 to 2008 served as the member of Parliament for Wildrose, typically winning more than 80 per cent of the popular vote as the only Sundre resident to represent the region in Parliament. Thompson’s passion for public service then drew him back to serve three more terms as a Sundre town councillor.

Throughout his life, Thompson contributed to countless charitable causes, including animal welfare and local historical preservation. Before passing away on Jan. 5, 2019, the Town of Sundre dedicated Myron Thompson Way, and established the Thompson Archives at the Sundre Museum, where he had volunteered for years.

The Myron Thompson Health Centre was originally built in 1968. It will continue to operate as the hospital for Sundre and area, with 24-hour emergency services, 14 acute-care beds, 5 long-term care beds and 4 restorative care beds.