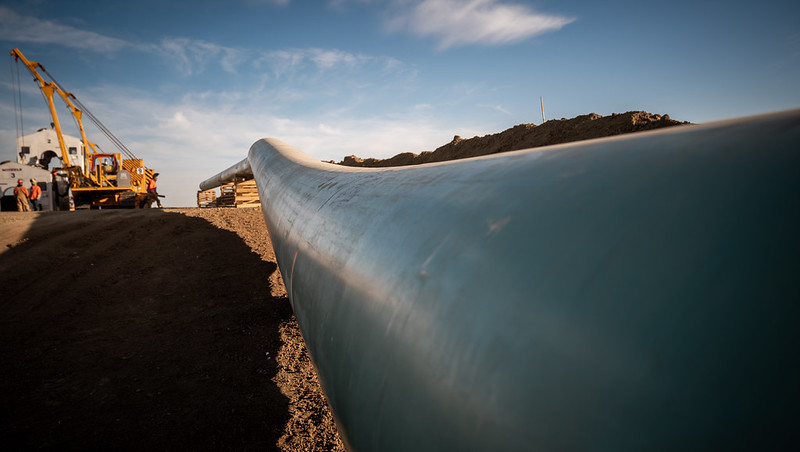 Since Alberta construction of the Keystone XL pipeline began in July, more than 90 kilometres of pipe have been strung along its right-away near Oyen. Premier Jason Kenney toured the area on Oct. 8, meeting workers and communities who have supported the project. As a result of Keystone XL construction, more than 1,500 Albertans are back to work and more than $250 million has been injected into the local economy.

Since construction began in July, the town of Oyen has doubled in population as workers in numerous trades have strung more than 90 kilometres of pipe along the Keystone XL right-of-way. Workers are getting steady paycheques and spending them in local businesses, boosting revenues in hotels, restaurants and retail stores.

This means thousands more service workers are benefiting indirectly from the project and will continue to as spending ramps up over the two-year construction period.

“The construction of Keystone XL is all about jobs, the economy and pipelines. It was great for me to see first-hand hundreds of Albertans working hard on KXL, thanks to Alberta’s investment that finally got construction underway. Pipelines are critical to our recovery from the global recession, and KXL shows our determination to fight for and build our economy’s future.”

Project proponent TC Energy estimates that apart from the company and its prime contractors, project construction activities are currently being supported by about 30 Alberta-based subcontractors, including local and Indigenous-owned businesses.

In fact, employment income during construction in Canada is an estimated $1.6 billion over two years.

“It’s an exciting time for the special areas and the communities along the path of the KXL pipeline. With the initiation of construction this summer, there has been a much-appreciated boom in our local economy. TC Energy, Michels, and many other subcontractors have arrived and have demonstrated exceptional professionalism and respect in our communities and are truly a welcomed addition to our area. It is amazing to finally see this long overdue project move forward.”

After more than a decade of stringent environmental reviews and cooperation with landowners, this work is occurring as a direct result of the Alberta government’s $1.5-billion equity investment in the project in 2020.

Alberta’s Recovery Plan is a bold, ambitious long-term strategy to build, diversify, and create tens of thousands of jobs now. By building schools, roads and other core infrastructure we are benefiting our communities. By diversifying our economy and attracting investment with Canada’s most competitive tax environment, we are putting Alberta on a path for a generation of growth. Alberta came together to save lives by flattening the curve and now we must do the same to save livelihoods, grow and thrive.