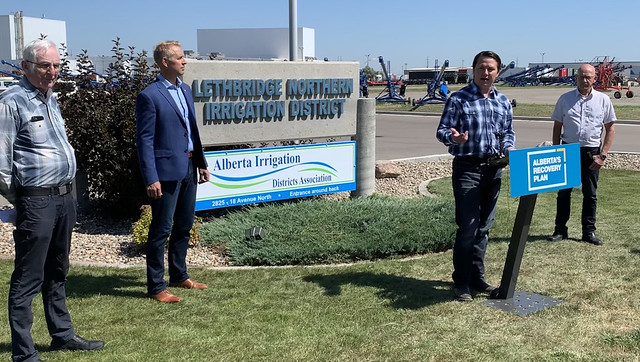 This funding will ensure the province’s irrigation districts continue to improve water infrastructure that provides water for irrigation and agricultural operations, municipal use, recreation, wildlife and habitat enhancement.

“Irrigation infrastructure is critical to economic stability in southern Alberta. This grant will increase great-producing irrigated farmland by conserving water and increasing water efficiency through pipelines. We were elected to deliver on jobs, the economy and pipelines and this project supports all three.”

“As well as supporting farmers and ranchers and the food processing sectors they supply, this long-running program ensures that thousands of Albertans in municipalities across southern Alberta will continue to have a reliable water source, aquatic habitats and recreational areas.”

“The staff at Lethbridge Northern Irrigation District work hard every day to make sure that water is delivered efficiently and safely. This funding will help ensure our infrastructure remains strong and can keep up with demand now and in the future.”

Rehabilitation projects supported by these grants include lining unlined canals and converting canals to pipelines. These projects increase the water conveyance network’s efficiency, allowing more acres to be irrigated with the existing water allocation.

Started in 1969, the Irrigation Rehabilitation Program provides cost-shared funds to irrigation districts to rehabilitate irrigation infrastructure. Alberta’s government contributes 75 per cent of the cost and the district contributes 25 per cent.

Alberta’s Recovery Plan is a bold, ambitious long-term strategy to build, diversify, and create tens of thousands of jobs now. By building schools, roads and other core infrastructure we are benefiting our communities. By diversifying our economy and attracting investment with Canada’s most competitive tax environment, we are putting Alberta on a path for a generation of growth. Alberta came together to save lives by flattening the curve and now we must do the same to save livelihoods, grow and thrive.