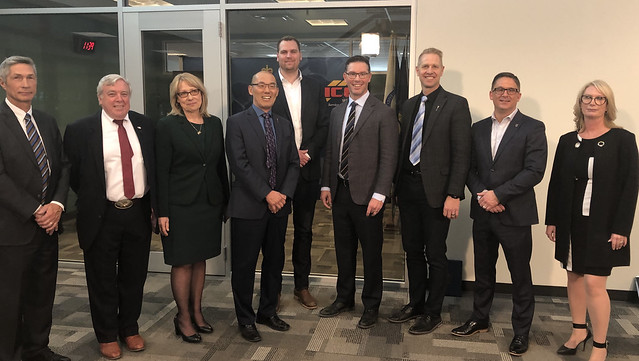 Ministers Schweitzer and Luan announce Lethbridge as a location for a new drug treatment court and more officers for ALERT.

The government is also increasing funding for law enforcement initiatives to disrupt and dismantle organized crime with a $50-million budget increase to Alberta Law Enforcement Response Teams (ALERT). A portion of this new funding will allow ALERT to expand regional organized crime units across the province, including four adding new investigators to the regional unit based in Lethbridge.

“Southern Alberta has had the highest increase in methamphetamine use across the province since 2012-2013 and trafficking in hard drugs such as meth and heroin in Lethbridge is nearly six times the national average. Our government will be opening a drug treatment court in Lethbridge to help keep southern Albertans safe by ensuring those struggling with addiction have access to treatment to prevent the cycle of re-offence. We are also providing law enforcement in southern Alberta with the tools they need to disrupt and dismantle the organized crime groups that traffic and supply the illegal drugs that fuel addiction and take a terrible toll on our communities.”

“Our government believes in a fair, firm and compassionate approach to improving addiction treatment services and supports in the province. This drug court is an important part of that work. These courts can have a profound impact on Albertans with addiction, and can help them on the road to recovery.”

New funding will help establish programs in Lethbridge and other yet-to-be-determined locations beginning in late 2021.

“The fundamental purpose of sentencing is to protect society and to contribute to respect for the law by imposing sanctions which include denouncing certain behaviour and deterring certain conduct. It also includes assisting in the rehabilitation of offenders – particularly those whose offences are motivated by an addiction to drugs. A drug treatment court that serves Lethbridge and area will assist in achieving these objectives and is a welcome addition to the courts of this region.”

“This announcement is the realization of a long term vision to see drug courts expanded to additional communities in Alberta. I look forward to being instrumental in the development of these new courts and in particular the launch of this exciting initiative in Lethbridge.”

“Drug courts will allow participants to repair their lives, reconnect with loved ones and find long-term recovery. I firmly believe if a drug court in Lethbridge had been available for my daughter all those years ago, her life would look very different. Perhaps all of the trauma she suffered would have been mitigated. We will never know for her, but I do know we now have the opportunity to positively impact the lives of others.”

Drug treatment courts have been operating in Edmonton since 2005 and Calgary since 2007, and part of the $20 million in additional funding is being used to double the total combined capacity of the two existing courts to about 80 participants a year.

ALERT is adding positions to regional organized crime units around the province – four of which will be added to an existing team of nine investigators based in Lethbridge.

This move will expand ALERT’s geographic reach in rural areas. It also creates opportunities for investigators from smaller law enforcement agencies to gain experience working on complex cases, which they take back to their respective organizations.

“The added resources and enhancement of our ALERT team in Lethbridge will create more opportunities for collaboration, intelligence-sharing, and provide a more versatile response to serious and organized crime in the region.”

The Lethbridge area will also benefit from the creation of a new ALERT unit specifically targeting the supply and sale of methamphetamine and opioids.

The specialized new unit will be made up of two teams: one based in Edmonton and one in Calgary. ALERT will deploy the teams to help communities experiencing a sudden or severe increase in problems related to methamphetamine and opioid use, such as a spike in overdoses or drug-related crime.