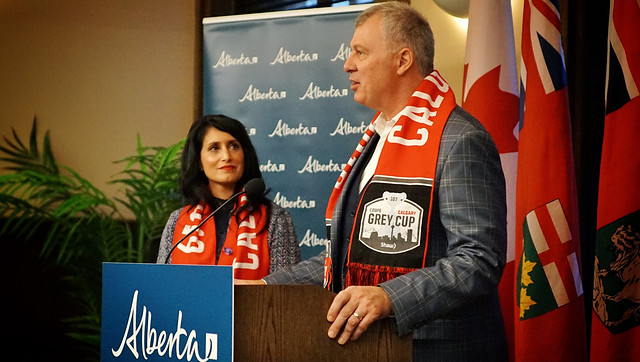 “A study from the University of Calgary has found that calls to domestic violence supports increase at specific times of the year. Holidays and major sporting events fall into this category. With the nation’s eyes on Calgary for the 107th Grey Cup this week, the Alberta government and the Canadian Football League are taking this unique opportunity to raise awareness about domestic violence in Alberta and Canada. Violence against women and girls affects us all. We hope this is the start of bigger conversations that will open the doors to opportunities for teams across the country to collaborate with their local organizations to make a difference.”

“The Canadian Football League is striving to be a leader on the issue of gender-based violence. Member clubs and many Canadian Football League teams work with local women’s groups and agencies to deliver meaningful gender-based violence-prevention programs across the country. The league also has in place a formal policy on violence against women, with strict protocol for dealing with reports that put the emphasis on providing the proper supports. The policy requires mandatory awareness training for all Canadian Football League employees. For example, the Edmonton Eskimos have partnered with the Gender-Based Violence Prevention Program and the Calgary Stampeders have partnered with the Alberta Council of Women’s Shelters to undergo such training. Still, there is much more for us to learn as a league and much more to be done by all of us in society. That is why we are so appreciative of Minister Aheer’s efforts to bring us together today.”