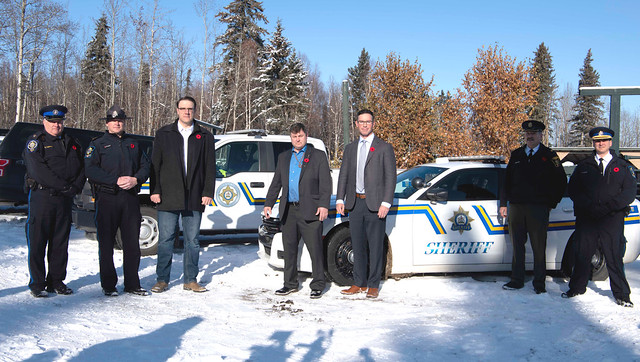 “We are sending a strong signal to rural Albertans who have been victimized for far too long. We have listened to you. We have heard you. And we are standing with you. We want to ensure you know that we are going to do everything we can as a provincial government to help you feel safe in your communities.”

“In many ways, rural communities are the heart of this province – hard-working, salt-of-the-earth, and always ready and willing to lend a hand to a neighbour in need. It’s heartbreaking to see the scourge of criminal activity worsen in these communities over the past several years, and we need to take action. This is an issue that affects many in my own community, and it is one that I take very seriously. As we promised, our government is taking immediate steps to make sure everyone feels safe and secure in their homes and in their communities.”

In rural areas, police can be stretched across large distances, which can lead to longer response times. To help reduce response times, the government will create the Rural Alberta Provincial Integrated Defence Force – the RAPID Force – by expanding the roles and authorities of 400 peace officers in the Fish and Wildlife Enforcement Branch, Commercial Vehicle Enforcement Branch and the traffic arm of the Alberta Sheriffs. The changes will allow these officers to respond to a wider range of calls and to assist the RCMP and other police services in some emergencies.

Training and related planning is underway, to have the first of these officers available to assist rural Albertans by fall 2020.

To strengthen trespass laws and further defend property rights, planned legislation includes a proposed five-fold increase to the maximum fines for trespassing offences, with fines of up to $10,000 for a first violation and $25,000 for subsequent offences, as well as possible prison time of up to six months. Corporations that help or direct trespassers would face fines up to $200,000. In addition to these increases, a proposed change would increase the maximum amount a court can order for loss of or damage to property from $25,000 to $100,000.

The planned legislation would amend the Petty Trespass Act to add explicit references to better capture land used for crops, animal-rearing and bee-keeping.

A proposed biosecurity regulation under the Animal Health Act would create offences and penalties for people who enter agricultural operations without authorization or encourage others to do so. Such incidents can introduce disease and threaten the welfare of animals.

Cracking down on metal theft

Government has proclaimed the Scrap Metal Dealers and Recyclers Identification Act to deter metal theft by making it more difficult for criminals to monetize stolen material by selling it for scrap.

Metal theft is a significant public safety risk. Thieves terrify property owners by trespassing and stealing materials such as copper wire and industrial batteries and frequently damage and interfere with critical systems like electrical lines, telecommunications cables and transportation infrastructure.

Criminals often steal metal from property owners and critical infrastructure in isolated areas to avoid detection. This has also made rural Albertans a target of trespassers and thieves looking for metal.

The Scrap Metal Dealers and Recyclers Identification Act was passed in 2012, but never proclaimed. An Order in Council signed Nov. 5 puts the legislation into effect immediately.

Regulations outlining requirements on dealers and recyclers to obtain proof of identification from sellers, record and retain details of transactions and share information with law enforcement will be in place by spring 2020. There is also an immediate requirement for scrap metal dealers and recyclers to report any suspected stolen property in their possession to authorities.

A new voice for victims

Community impact statements will recognize the far-reaching effects of a crime and how an entire community can suffer harm or loss.

A new program will enable communities to take part in the sentencing of offenders by letting them submit a statement describing how the crime has affected the community as a whole – including the emotional, physical and economic impact, or fears they may have for their own security.

A community impact statement could be written on behalf of any group of people, such as those in a geographic area, diverse segments of the population, and groups affected by the crime.

There will also be additional support for victims, via a new Restitution Recoveries Program. The program will help victims collect outstanding payments on restitution orders by giving government the authority to use enforcement measures against offenders, such as garnishing wages or seizing and selling property, as needed.

This program will reduce red tape for victims who would otherwise have to navigate the legal system and attempt to collect court-ordered restitution at their own risk, effort and expense.