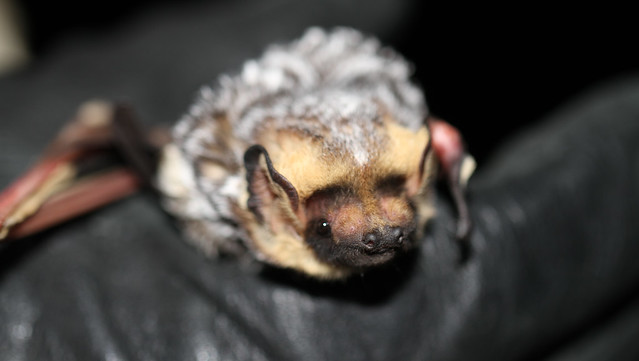 Hoary bats have multi-coloured fur with white tips that look like "hoar-frost" which is how they got their name. They are the largest bats in Canada and usually roost in tall trees. Photo: Cory Olson, Alberta Community Bat Program.

To encourage young Albertans to learn about – and respect – the province’s many bat species, the province is holding a colouring and drawing contest to coincide with Bat Week. From Oct. 24 to Nov. 4, young Albertans are encouraged to draw and colour a picture of bats in Alberta, and to share their drawings with the Ministry of Environment and Parks.

Bats have a positive effect on our province – they control insect populations, help pollinate plants and can spread seeds that help restore forests. Every year, during the last week of October, people around the world celebrate Bat Week to raise awareness about the need to protect bats and to dispel common myths about these flying mammals.

“In addition to being fascinating animals, bats play an important role in keeping our provincial ecosystem and economy thriving. I’m looking forward to seeing the creativity of Alberta’s young people and fostering a better understanding of bats in the province.”

The winner will be selected via random draw and announced on Twitter (@AB_Enviro) the week of November 4. Albertans can be as creative as they wish with their drawings – they don’t need to stick to black and white, and can show bats in any part of our province.

“We all need to understand the importance of bats in our ecosystem and learn how we can contribute to help protect their habitat to ensure they survive.”

To submit your drawing

Submissions can be sent via social media, by tweeting @AB_Enviro and using #AbBatWeek. Drawings can also be emailed to jess.sinclair@gov.ab.ca  or can be sent to the address below:

Please send submissions by Nov. 4. All submissions are subject to FOIP and winners agree to their artwork and name being made public on government media channels.