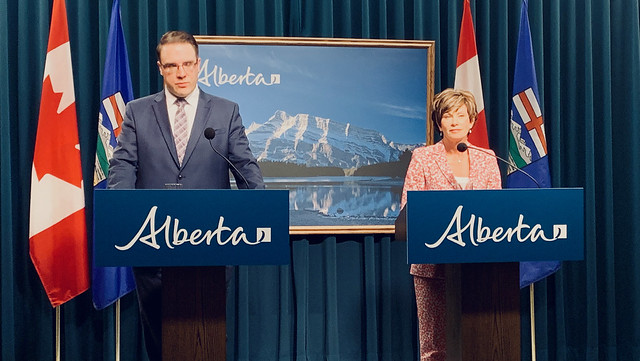 Minister Nixon and Minister Savage announce a review of the Alberta Energy Regulator.

Government is seeking advice and input from stakeholders and the public on ways to improve the Alberta Energy Regulator (AER), while maintaining stringent environmental standards and respecting the rights of landowners.

This process will identify changes and enhancements to the AER’s mandate, governance and system operations to ensure that Alberta remains a predictable place to invest and a world leader in responsible resource development.

“We’ve seen the performance of the AER decline over the past few years – despite hiring more staff. It now takes four times longer than other jurisdictions like Texas to get a project approved in Alberta. We are engaging in a thoughtful and thorough evaluation of the regulator in order to maintain the high standards that have made Alberta a global oil and gas leader.”

The review will include:

“We promised Albertans that we would conduct a review of the AER within 180 days, and I’m proud to move forward on this platform commitment. We must preserve Alberta’s reputation as an environmentally responsible resource producer – but we must also restore confidence with our investors and landowners as a leader in predictable and efficient regulation.”

Government will release a report once the review is complete.

The province is also replacing the current board with an interim board of directors made up of public servants and individuals with oil and gas expertise. Board members will carry out the general management of the business and affairs and will serve for approximately nine months. This is in keeping with a promise made during the recent provincial election.

Interim board members and biographies

Order in Council 156/2019 appoints the following individuals as members of the board of directors of the Alberta Energy Regulator, each for a term of nine months:

Beverly Yee, chair of the board of directors

Current Deputy Minister of Energy, Sprague served as associate counsel at Miller Thomson LLP where he provided advice on natural resource and environmental law, administrative law matters, and regulatory processes involving government. Previously, he served as Deputy Minister of Energy from July 2013 to May 2016 and chair of the Alberta Petroleum Marketing Commission.

Goldie has more than 30 years of experience in the oil and gas industry, including over seven years with Cenovus Energy in Alberta. He has broad experience in business development, downstream/refining, upstream operations and development, and exploration and risk assessment.

Habib is a former board member of the National Energy Board, Canada’s national energy regulator, and has over 30 years of experience in the regulation of oil and gas transmission, distribution, gas processing, energy exports and upstream energy infrastructure on both the provincial and federal level.

Brillon worked for Encana for over 30 years, including key leadership roles in the company’s most significant milestones, such as the structuring of the $22.5-billion merger that created Encana in 2002, and restructuring Encana into a pure play natural gas company in 2009.

The Alberta Energy Regulator is responsible for regulating the life cycle of oil, oil sands, natural gas, and coal projects in a manner that protects public safety and the environment.