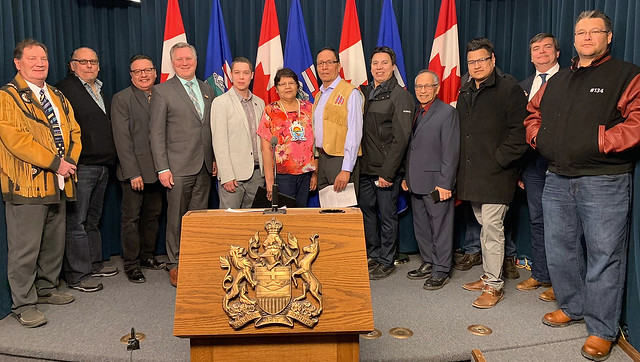 In 2017, Premier Rachel Notley committed $100 million to deliver clean drinking water to the boundaries of First Nations. Ten projects are now underway that will benefit 14 First Nations across the province.

Grants are given to local water commissions or water supply municipalities to extend their service to First Nations.

“As Alberta continues on the journey of reconciliation, it is of the utmost importance that Indigenous people have access to safe, clean and reliable drinking water. Building up capability and ensuring water sovereignty for First Nations is my top priority.”

“We’re very pleased to have concluded an agreement with Alberta in December of 2018 that both respects and protects our treaty rights and self-government and, at the same time, is a key part of securing an abundant, safe and reliable water supply for decades to come. We are hopeful the agreement will also serve as a model for resolving future water disputes between Alberta and other First Nations. This is a positive development.”

“I want to commend the province on the work they’ve completed over the past four years – and specifically their commitment to making a positive impact in Indigenous communities. Our members have experienced the direct benefits of provincial programs that are aimed at improving the community’s overall safety, health and well-being, and the First Nations Regional Drinking Water Tie-In Program is one such example.”

“Projects that create the ability for First Nation communities to access potable water and wastewater infrastructure, which helps to build capacity to serve their communities, are truth and reconciliation in action. I applaud the efforts Alberta and the federal government are taking, by providing funds directly earmarked to insure full inclusion and full partnership at the decision-making table.”