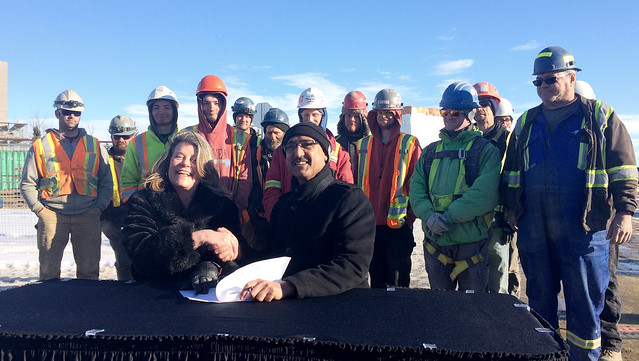 Amarjeet Sohi, Minister of Natural Resources, on behalf of Jean-Yves Duclos, Canada’s Minister of Families, Children and Social Development and Minister Responsible for Canada Mortgage and Housing Corporation (CMHC), and Lori Sigurdson, Minister of Seniors and Housing, today announced they have reached a bilateral agreement under the National Housing Strategy (NHS). This agreement, which will be cost-shared ‎by the governments of Canada and Alberta, demonstrates a joint commitment to prioritize affordable housing.

The 10-year agreement will invest $678 million to protect, renew and expand social and community housing, and support Alberta’s priorities related to housing repair, construction and affordability. The governments of Canada and Alberta will also work together on the design and implementation of a new Canada Housing Benefit for the province, to provide affordability support directly to families and individuals in housing need. The new agreement marks the beginning of a partnership that will be supported by long-term and predictable funding starting April 1, 2019.

This is a ‎progressive housing agreement that commits the governments of Canada and Alberta to new and higher standards of transparency, public engagement and housing quality, including improved energy efficiency and accessibility. The agreement also acknowledges the importance of prioritizing people most in need, incorporating a human rights-based approach to housing and applying a gender lens to all investments.

“We are striving to ensure that every Canadian has a safe and affordable place to call home.  Long-term and predictable funding for housing has been needed for more than a decade. Today, with the Alberta government, we have taken a significant step toward our goal of building strong communities where Canadian families can prosper and thrive, now and for the future. Our government will continue working in partnership with Alberta and other provinces and territories towards a 15 per cent expansion in new affordable housing units and renewing 20 per cent of existing community housing units across the country.”

“Alberta’s first Affordable Housing Strategy was launched in 2017 with the goal of building and renewing 4,100 units, and that goal is about to be achieved and exceeded. This new agreement means Alberta can continue our bold approach to address the housing needs of Albertans. We want to make sure that all Albertans have a safe place to call home, close to their families and communities. We are eager to continue this important work with our federal partners.”

Editor's Note: This news release was also issued by the Canada Mortgage and Housing Corporation on March 15, 2019.