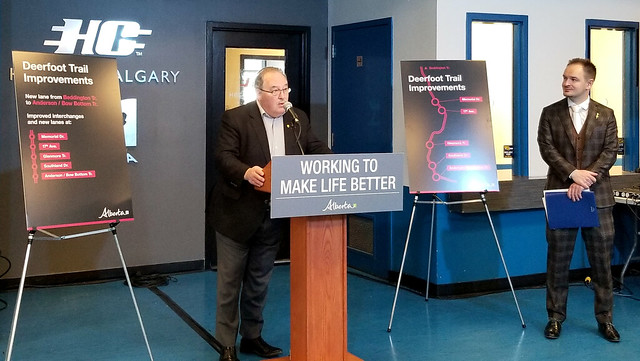 Deerfoot Trail is the busiest roadway in Alberta with an average of 175,000 vehicles travelling on it every day. The province is adding both northbound and southbound lanes to 21 kilometres of Deerfoot Trail between Beddington Trail and Anderson/Bow Bottom Trail, to improve traffic flow and ease congestion.

“Deerfoot Trail is the busiest road in Alberta, and a vital artery for Calgary. It has become increasingly congested, and everyone who drives this road will appreciate this expansion plan. We want commuters to spend less time in traffic, and more time with their families and loved ones.”

Calgarians rely on Deerfoot Trail as the city’s most used north-south vehicle corridor. This major infrastructure project will transform Deerfoot Trail into a modern freeway that meets the current and future needs of a growing, active city.

“These improvements to Deerfoot Trail have been long awaited by Calgarians. This substantial investment from the Government of Alberta will go a long way in improving the traffic flow and safety on a roadway that is used by thousands of Calgarians every day.”

This major expansion builds upon work already underway to optimize traffic flow on Deerfoot Trail. In early 2019, the province issued a Request for Proposals for engineering of a new Intelligent Transportation System to help ease congestion by employing variable speed limit technology and new message boards to alert commuters of expected travel times and incidents ahead.

The expansion of Deerfoot Trail is expected to create 2,330 jobs, and $478 million has been allocated in the Capital Plan for the project.