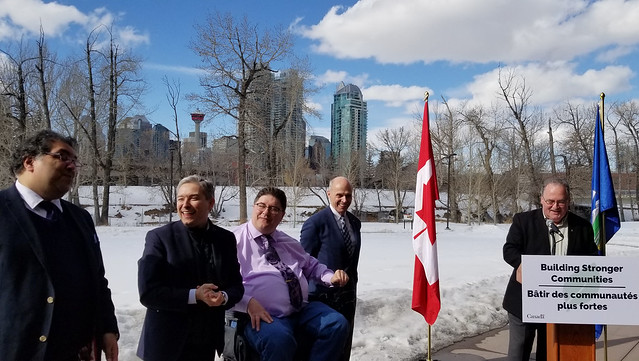 Minister Mason speaks at the federal announcement of $168.5 million in funding for the Springbank Off-Stream Reservoir.

Reducing the impact of natural disasters such as flooding is critical to keeping Canadian families safe, protecting local businesses and supporting a strong economy and middle class.

In June 2013, communities in southern Alberta experienced devastating effects of flooding caused by heavy rainfall. To better protect these communities against future flooding events brought on by climate change, the Government of Canada is supporting the construction of an off-stream storage reservoir in Rocky View County to divert extreme flood flow from the Elbow River to a reservoir where it would be contained temporarily until the flood peak has passed.

Once completed, these measures will help protect thousands of people and their homes, schools and local businesses, and ensure that southern Alberta communities remain safe for decades to come.

The Government of Canada is contributing $168.5 million to this project through the Disaster Mitigation and Adaptation Fund.

“Taking concrete steps to adapt to the impacts of climate change is more and more essential to ensuring a safe, prosperous future for our kids and grandkids. By investing in the Springbank Off-Stream Reservoir project, we are helping Alberta get ahead of the problem, and protecting Calgarians and communities to the south from the heavy personal and economic costs of increasingly threatening weather events.”

“Extreme weather is becoming more severe, more frequent, more damaging and more expensive because of climate change. By investing in the infrastructure that protects our neighbourhoods, businesses and families, we are building communities that can withstand future natural disasters and thrive for generations to come.”

“Our government is committed to building the Springbank Dam to protect Calgarians and businesses from a devastating flood like the one we saw in 2013. I am happy to see this significant investment from the federal government as we continue to move forward with this critical project.”