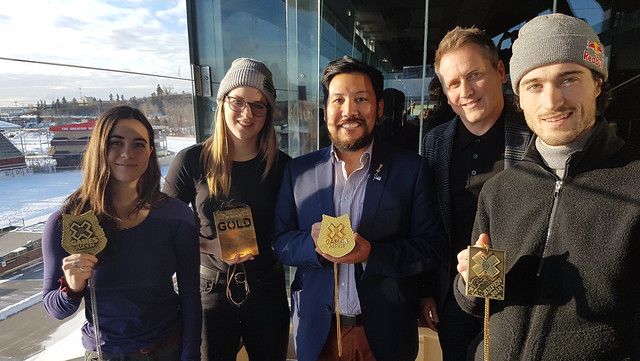 Minister Ricardo Miranda meets with X Games athletes at the future site of a 14-storey ski jump on the Calgary Stampede grounds.

Calgary has secured exclusive rights to host the X Games. It would be the first time the event is in Canada. The X Games would bring more than 200 international skiing and snowboarding athletes to Alberta for a four-day action sports, music and art festival.

“We are thrilled to help bring the X Games to Canada for the first time. This is an important first step to secure this exciting international event. This would be a fantastic opportunity to create jobs and to show Alberta’s amazing athletes facilities, artists and culture to the world.”

The government has committed $13.5 million over the next three years to help bring the X Games to Calgary. Hosting the X Games would inject about $75 million into Alberta’s economy and support the equivalent of 540 jobs.

“We’re excited to be taking this step towards hosting the first X Games on Canadian snow. It’s about bringing Calgary to a world stage. The economic spinoffs are significant, and support our plans for tourism and economic development.”

“Our vision for Calgary is to bring the X Games to the masses through the action sport athletes and musical artists who create, live and inspire youth culture in Canada. With the incredible support of our sport, community, tourism and government partners, and of course, Canada’s athletes, we’re looking to create a city-stopping and uniquely Canadian annual event in Alberta.”

“After 10 X Games and six medals, it would be a dream come true to have the opportunity to compete on home snow in Calgary on action sport’s biggest stage. The venues are ideal and I know the Canadian fans would go crazy for this kind of event in our backyard.”

Hosting the X Games aligns with a key priority of the Government of Alberta – growing and diversifying the province’s tourism industry by boosting visitation in the winter season and increasing sport participation opportunities for all Albertans.