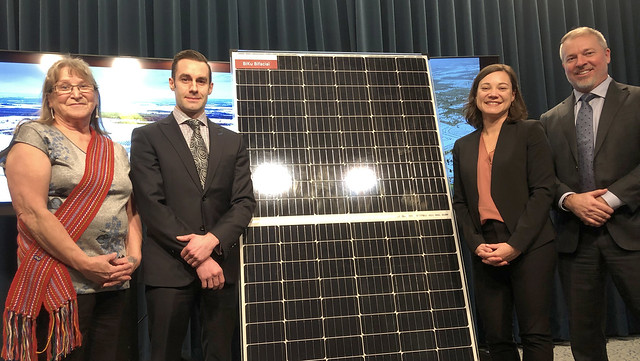 This solar electricity contract will be the most cost-effective government procurement of solar power in Canadian history. At an average price of 4.8 cents per kilowatt hour (kW-h), Alberta’s proven approach to attracting new investment in renewable energy is once again setting national records, repeating the success of the Renewable Electricity Program.

The new contract will supply approximately 55 per cent of the government’s annual electricity needs, saving $3.9 million per year compared to the expiring contracts.

“Alberta is one of the best places in the world to invest in renewable energy. I am so proud to take another huge step in advancing solar energy in Alberta while creating good local jobs and saving millions of public dollars. This is an important step in building a more resilient and diversified economy and attracting further investment to Alberta’s booming renewables market.”

To deliver on the procurement, three new solar facilities will be built near Hays, Tilley and Jenner, creating approximately 270 local jobs in southern Alberta during construction. Canadian Solar is building these new facilities in partnership with Conklin Métis Local 193 as 50 per cent equity owners.

“The partnership between Canadian Solar and Conklin Métis Local 193 is a spectacular example of what can happen when industry, government and Indigenous Peoples come together. In addition to reducing government costs, this project empowers Indigenous Peoples to have a meaningful role in taking advantage of the abundant solar resource around us.”

Since 2015, solar generation in Alberta has increased over 700 per cent, mostly with small-scale projects. These three projects represent another doubling of Alberta’s current capacity, while smaller projects will continue to grow with supportive programs.

“We see great potential in the Alberta solar market, and we’re pleased to supply subsidy-free solar power to meet Alberta’s clean energy needs. We hope these 94 megawatt peak solar project contracts serve as a catalyst for solar industry growth in Canada, specifically in Alberta. We are delighted to partner with Conklin Métis Local 193, the Indigenous community that owns a 50 per cent equity stake in the Hays, Jenner and Tilley solar projects.”

“We are extremely excited about our partnership with Canadian Solar, world leaders in solar power. As a Métis community, we highly value the opportunity to invest in renewable energy projects within the country. This partnership will help diversify our investment portfolio and the financial benefits will support our community in key social and economic initiatives. We applaud the Government of Alberta and Canadian Solar for their progressive mentality and look forward to a long-lasting, prosperous relationship.”