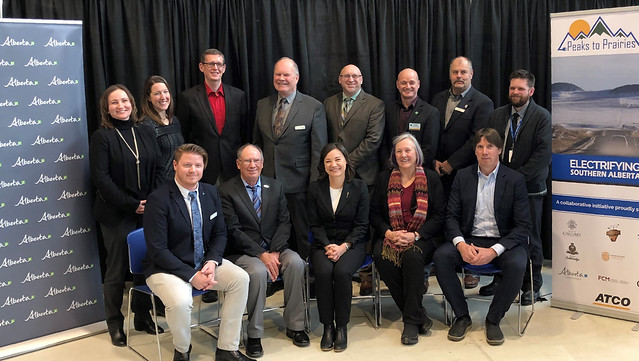 Minister Phillips and MLA Fitzpatrick join partners of the Peaks to Prairies network to announce the installations of EV charging stations in Lethbridge.

The Government of Alberta is providing $1.2 million in Climate Leadership Plan funding to the Community Energy Association to support the Peaks to Prairies Southern Alberta Electric Vehicle Network.

When completed, the Peaks to Prairies network will cover more than 1,700 kilometres of southern Alberta highways and transition the region to full electric vehicle connectivity. The charging stations will be powered by 100 per cent renewable energy from southern Alberta.

“Supporting new electric vehicle charging stations will help Alberta transition to a lower-carbon future. This grassroots initiative is proof that Albertans are leading the way in projects that diversify our economy, create jobs and reduce greenhouse gas emissions that cause climate change.”

The Peaks to Prairies network addresses a gap in charging infrastructure across southern Alberta by developing a base network for electric vehicle charging stations. The network will give electric vehicle users access to more cultural and recreational opportunities throughout southern Alberta. Placing charging stations in recreational and retail areas of small communities will help boost tourism and economic development, inspire further investment in the region and reduce emissions.

“Community Energy Association has a long history of supporting local governments to achieve climate and energy goals. The Peaks to Prairies EV network exemplifies regional collaboration to build and diversify local economies while contributing to climate action goals. This community-led approach is a template for other Alberta regions, as to how we can get further by working together. It is a privilege for us to work with this innovative group of communities, and to have the support from provincial and federal levels of government to bring the EV network to fruition.”

The Peaks to Prairies project was created by a group of southern Alberta municipalities and economic development groups, including SouthGrow Regional Initiative, Alberta SouthWest Regional Alliance, City of Lethbridge, City of Calgary and Medicine Hat College. The partners came together in 2016 with an interest in developing a regional electric vehicle charging network to facilitate emissions reductions, economic development and tourism.

“Peaks to Prairies reflects the commitment we have in southern Alberta to work collaboratively across the region to support development that is sustainable and forward-thinking. Through this project, we are not only shining a light on the advancement of renewable energy generated in our region, but we are ensuring that our communities can benefit from this emerging form of transportation.”

The Peaks to Prairies charging network will use charging stations that are made in Canada by AddEnergie. Alberta-based ATCO Electric was chosen by the project partners to install, own and operate the network.

“Low-carbon transportation and affordable electric vehicles are becoming a reality. When ATCO made its first investment in the public fast-charging corridor along Highway 2 last year, it was a tremendous step forward. At ATCOenergy, we see it as part of our ongoing commitment to creating a clean energy future for the communities we serve. It’s just one of the energy-efficient, innovative and valuable solutions we’re exploring for homes and businesses across Alberta. We are very proud to be working with our partners in southern Alberta to establish a robust charging network in the province.”