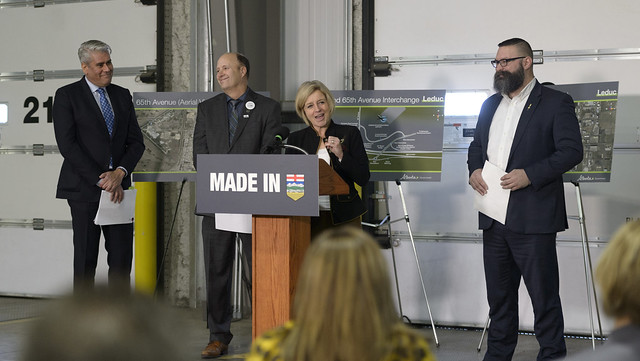 Naseem Bashir, Board Chair, Edmonton Airports (L), Mayor Young, Premier Notley and Minister Anderson (R) at an announcement of a new interchange at 65 Avenue and Highway 2 in Leduc.

The Government of Alberta, in partnership with the City of Leduc and the Edmonton International Airport (EIA), is moving forward with plans to build a new interchange to connect 65 Avenue with the EIA’s Perimeter Road. This important link will enable the development of new commercial property to enhance the economic diversification of the province, particularly by improving the movement of goods.

“Our Made-in-Alberta plan is about creating jobs, diversifying the economy and helping our companies grow. The airport and surrounding region are major drivers of economic activity and job-creation for all of northern Alberta and this infrastructure project will build on that momentum.”

Investment in the 65 Avenue Interchange Project is expected to generate $600 million in investment growth for the Leduc region, including roughly 4,000 new construction jobs and 4,300 permanent, multi-sector jobs.

“Leduc is one of the fastest growing regions in Alberta and attracts business and investment from around the world. This is one more way that our government is investing in important projects that will help spur economic activity in our region. I am so pleased to see how our partnership with local leaders is supporting jobs and economic development in our community.”

The interchange will include:

“This announcement is a direct result of effective partnerships and collaboration within our region and our province. This is an exciting time, and we should all be very proud. This significant infrastructure investment allows us to expand logistical and transportation networks, which enables businesses to get their products to market.”

The project will help create new trade and investment connections, allowing Alberta companies to take advantage of the EIA as a multi-modal hub that connects air, road and rail so more products can be moved, particularly into Asia, Europe and the United States.

“This key infrastructure investment builds on regional, national and international investor confidence in the Edmonton Metro Region. Increasing access to and from EIA enables the continued positive trajectory of our strong record of economic development and job creation and solidifies our position as a global trading centre.”

On average, more than 54,000 vehicles use the stretch of Highway 2 from south of the 50 Street interchange to north of the 50 Avenue interchange every day. The interchange will help reduce congestion on this busy part of the QEII, while providing a major new connection to developments in Leduc and at the EIA.

“This new interchange will provide our trucks with improved access to major roadways in a more efficient manner, and alleviate congestion during peak times. As a result, the goods we haul can be delivered to our customers and the marketplace more efficiently.”

The province, the City of Leduc and the EIA each previously contributed $1.2 million for the detailed design work which is underway and expected to be complete by the end of 2019.