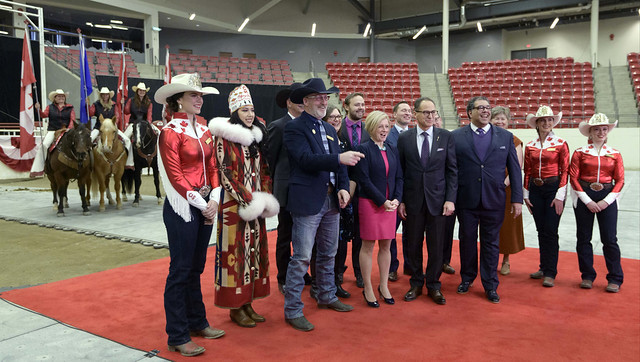 The Alberta government investment in the BMO Centre will create 2,250 jobs and contribute $223 million annually to Alberta’s economy. The expansion will double the size of the BMO Centre, making it the second largest convention centre in Canada and a tier-one trade show facility, similar to venues in Vancouver, Toronto and Montreal.

“East Victoria Park, which includes Stampede Park and BMO Centre, has long stood as the city’s cultural epicentre. With this announcement, we are going to kick-start urban renewal in Calgary’s downtown, create thousands of jobs, and increase tourism, business development and investment in Calgary.”

“This CRL has been one of the most successful in the world, and the new vibrancy of the East Village is testament to that. Extending it for a further 20 years after 2026 will allow us to craft even better neighbourhoods, particularly south of the tracks in East Victoria Park where we are crafting a great cultural and entertainment district for Calgary.”

“The provincial and municipal governments have made a significant commitment towards the future economic diversity of the city. The BMO Centre will be a major catalyst that drives development in Calgary, and in particular the Rivers District, with the desire to begin construction early in 2019. Thank you to Premier Notley for understanding the needs of Calgary and southern Alberta, and helping position our city for future growth and opportunity.”

In addition to the more than 1.2 million visitors Stampede Park welcomes annually during the 10-day Calgary Stampede, the BMO Centre is a hub of activity year-round, hosting more than 1,200 events, from conferences to celebrations and corporate events.

In addition to the expansion of the BMO Centre on Stampede Park, the Calgary Rivers District CRL extension will allow for $140 million in infrastructure upgrades in Victoria Park, and future transformation of Arts Commons, which includes the Jack Singer Concert Hall, Max Bell Theatre, Martha Cohen Theatre, Big Secret Theatre and the Engineered Air Theatre.

Ultimately, the CRL extension will transform Calgary’s Victoria Park into a vibrant, high-density, mixed-use community that draws on the beauty of its natural surroundings, the strength of its cultural heritage and the vitality of its entertainment roots.