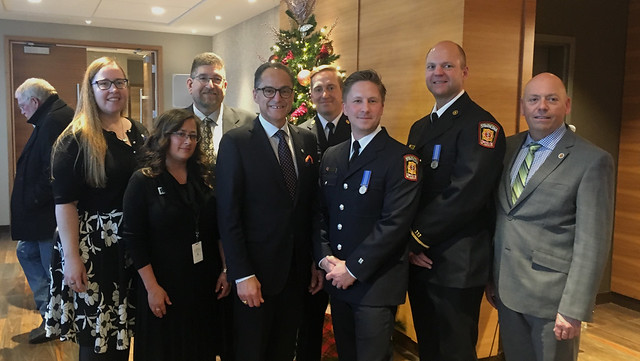 Ministers Ceci and Gray stand with representatives of the nursing and emergency and fire response professions in Alberta after the tabling of a bill related to joint pension governance.

“Our government believes that Albertans who have been paying into their pensions for decades should have control over their pensions. For almost 30 years, successive governments have been making promises to move on these practical reforms and, today, our government is finally making good on those promises.”

“As a retired paramedic with over 30 years of service, it brings me a sense of relief and comfort to hear that our government is at last putting the management of the pension plans into the hands of the employees and employers and out of the hands of the government. I hope this will at last keep our pensions out of politics.”

“Above all else, this legislation represents something so fundamental: certainty and security for my future and my family’s future.”

“I am so happy about this. As a nurse and a frontline health-care worker, I want to be able to always focus on the well-being of my patients. So it’s great that the promise made by the government almost 30 years ago has finally been honoured.”

“Joint governance of pension plans simply makes sense. It gives both employers and employees an equal say in how their pension plan is run. It is a best practice across the country and, as an employer, AUMA is supportive of this governance structure.”