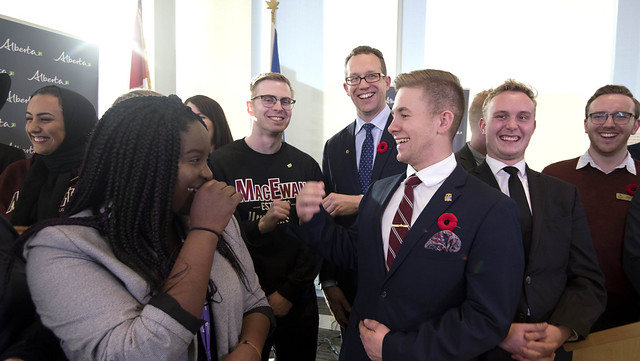 Minister Schmidt celebrates tabling An Act to Improve the Affordability and Accessibility of Post-Secondary Education.

If passed, the act would amend the Post-Secondary Learning Act to implement the province’s revised tuition framework.

For the first time in Alberta’s history, the minister would be able to regulate tuition and mandatory non-instructional fees to ensure fairness and predictability for students. The new framework would also ensure that students have a greater voice in decisions that impact their education.

In addition, the framework would pave the way for government to:

“Post-secondary education is the key to prosperity, especially in our province’s diversifying economy. But we need to make sure that students can afford to get a good university or college education, and that they have a say in the decisions that affect their education. That’s why we did such extensive consultation – we genuinely wanted to hear what Albertans had to say. By empowering our students, we help them get a good education and set our province up for continued success in the future.”

To help more students afford a university or college education, government is also extending the tuition freeze for a fifth consecutive year. University students taking an average-priced program would save almost $2,000 on a four-year degree.

“We have been asking for these changes for a long time, and we’re happy to see the government addressing students’ concerns regarding the costs of tuition. We're looking forward to legislative changes that help support students in the long run, as students are the largest stakeholders in the post-secondary system, and it’s encouraging to know that our voices matter.”

“Affordability has always been a concern of post-secondary students. We are happy the government is moving to ensure a post-secondary education is affordable for all students regardless of where they study in the province.”

“The transformative experiences students take away from Alberta’s post-secondary institutions fundamentally change them in ways that benefit not only those students, but also shape our province’s social and economic future. It’s why we support the government’s commitment to making it possible for more Albertans to access – and be able to afford – a quality education.”

All the proposed changes are the result of consultations with students, faculty and staff. The consultations involved an online survey, which received over 4,000 responses, and a number of focus groups. If passed, the changes to the Post-Secondary Learning Act would be effective Feb. 1, 2019.